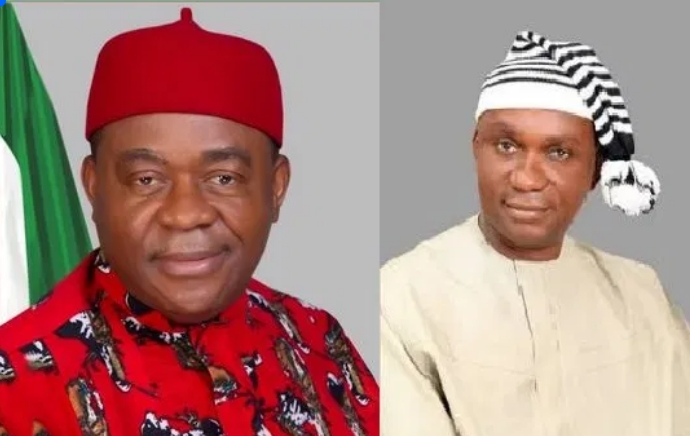 The Economic and Financial Crimes Commission (EFCC) has opened an investigation into an alleged diversion of N525bn by a former Abia State Governor, Chief Theodore Orji and his son, Chinedum, while serving as the governor of the state.

The EFCC, in a statement on Saturday, February, 8, 2020, said it began the investigation following a petition by a group, Fight Corruption: Save Nigeria Group.

In a petition dated March 17, 2017, filed by Fight Corruption: Save Nigeria Group, the former governor was accused of receiving and diverting various sums of monies meant for the state’s development.

The petitioners alleged that the funds were received by the Abia State government, and nothing commensurate to show for it.

Based on the petition, EFCC commenced investigations and discovered that the former governor, who was a Chief of Staff to the convicted ex-governor Orji Kalu, was the Authorising Officer drawing N500m monthly purportedly as Security Vote, which was converted.

The N500m, investigation revealed, was aside security funds expended on the Nigerian Police, The Nigerian Army, DSS, Navy anti-Kidnapping Squad, anti-robbery Squad, purchase of Security equipment and vehicles for the security agencies.

Investigation was extended to his family members to ascertain the link and their culpability in the alleged fraud.

The ex-governors first son, Chinedum Orji Eyinanya, who is currently Speaker of Abia State House of Assembly, is now a frequent guest at EFCC Headquarters to throw light on his involvement in the fraud. He was with operatives of the Commission last Thursday.

A check on his financial activities revealed that he had about 100 accounts in different banks, with over 80 percent of them still very active. The accounts, which were both corporate and individual, received so much deposit in cash without evidence of job or services rendered.

Exact Construction Limited, equally traced to Chinedum, is believed to have no record of any construction work in the country. Nonetheless, it received humongous deposits in Keystone Bank account. Between October 2008 and February 2015, the company account number 005374800 had deposits of N1, 188, 924, 190.41 (One billion, one hundred and eighty-eight thousand, nine hundred and twenty-four thousand one hundred and ninety Naira, forty-one kobo).

Analysis of several other accounts is still ongoing, as at the time of filing this report.