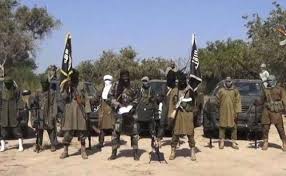 The latest attacks underline the threat to civilians in the region, with security high on the agenda as Nigerians prepare to elect a new president and parliament on February 16.

On Monday, fighters loyal to factional leader Abubakar Shekau stormed the villages of Shuwa and Kirchina villages, in the Madagali area of Adamawa state.

Madagali is in the north of Adamawa, near the border with neighbouring Borno state, which has been at the epicentre of the nine-year conflict. “They (Boko Haram) killed one person in Shuwa and two more in Kirchina,” Maina Ularamu, a community leader and former political administrator in the district.

“The terrorists attacked Shuwa around 6:45 pm (1745 GMT), firing guns and RPGs (rocket-propelled grenades) and chased away the policemen in the town.” The insurgents stole vehicles, including a police van, and looted shops before setting fire to buildings. Troops from Madagali, 13 kilometres (eight miles) away, deployed and engaged the militants in a fight, forcing them to withdraw.

The gunmen attacked Kirchina as they fled towards the Sambisa Forest which straddles Borno and Adamawa states, said local resident Sylvanus Waramulu. “They killed two people, looted shops and burnt them along with several houses,” he added. Earlier on Monday, Boko Haram fighters from the same faction shot dead three goat herders near the village of Tubba, some eight kms from the Borno state capital Maiduguri. Two of the three were killed as they tried to recapture the herd of goats.

Boko Haram has repeatedly targeted farmers, loggers and herders, accusing them of passing information on the group to soldiers and the militia fighting them. Last month, four farmers were killed as they worked near Molai village, five kms outside Maiduguri.

Boko Haram’s decade-long uprising to establish a hardline Islamic state in remote northeastern Nigeria has killed more than 27,000 people and displaced 1.8 million from their homes.

The conflict has spilled into neighbouring Niger, Chad and Cameroon, sparking a dire humanitarian crisis in the region.

I’m back with Offset – Cardi B

A popular hacktivist group, Anonymous, has hacked the Twitter account of the National Broadcasting Commission (NBC) in an apparent move…