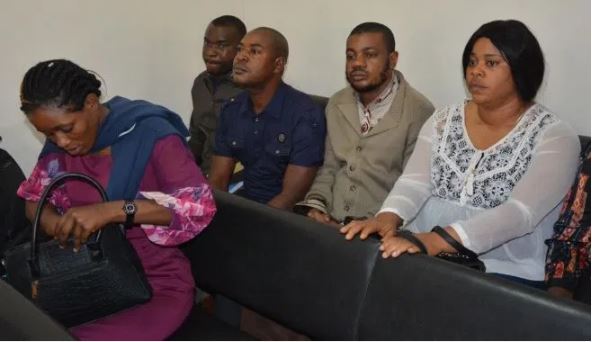 The visa fraudsters after they were arrested

The Abuja Zonal Office of the Economic and Financial Crimes Commission, EFCC, on Thursday, January 30, 2020, arraigned five suspected visa fraudsters before Justice Olubukola Banjoko on a seven-count charge, bordering on false pretence and obtaining by tricks to the tune of N1.8 million.

The defendants are: Ifeyinwa Mbamalu, Christian Akor, Grace Oluseun Akinwunmi, Samuel Chinedu Iwuagwu and Adebola Saheed Adewale. They were accused to have connived to obtain sums of money from their victims in the guise of helping them to obtain Canadian visas.

One of the charges reads: “That you, Christian Akor between October 13th and 18th 2018, in Abuja within the jurisdiction of this honourable court, dishonestly converted to your own use, the sum of N300, 000, being part of the sum of N1, 800,000, received by one Ifeyinwa Mbamalu, purportedly to procure a valid Canadian Visa and thereby committed an offence contrary to section 308, of the Penal code Act; and punishable under section 309, of the same Act.”

The defendants persons pleaded “not guilty” to the charges.

Prosecution counsel, Ayodeji Fadahunsi, in view of their no guilty plea, asked the court for date for commencement of trial and for the defendants to be remanded in the custody of Nigerian Correctional Centre.

Justice Banjoko, granted each of them bail in the sum of N10 million (Ten Million Naira) and two sureties in like sum. The sureties, the judge ruled, must have proof of residency in Abuja, and must submit their international passports as well as three years tax clearance.

They were remanded in EFCC custody, pending the fulfillment of the bail conditions and adjourned the matter until March 16, 2020, for commencement of trial.