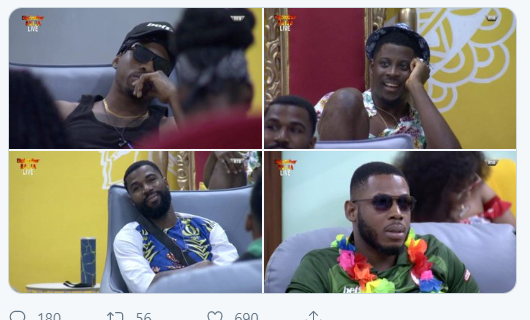 After three months, in which a total of 26 individuals have dwelled in the house, it is now down to the top five housemates in Big Brother Naija.

This year’s edition has been all about Pepper Dem, and the last five standing – Seyi, Frodd, Mike, Mercy and Omashola – all have equal chances of finishing their once in a lifetime adventure by clinching the grand prize of N60m.

It has been an intriguing journey for the top five housemates, who have all displayed a combination of street sense, confidence, drama, and enjoyed massive luck to emerge as the show’s finalists.

As expected, the five housemates have been over the moon since ‘Biggie’ confirmed their spot in the final. The last few days have also seen the finalists taking stock of all that happened throughout their stay in the house, knowing that the competition is fast coming to end. But perhaps, most telling is the tension that has gripped each of them going into today’s final. Although they have all wished themselves well, each of the remaining housemates desperately wish that they are declared winner by Ebuka Obi-Uchendu, the show’s host.

The trio of Seyi, Omashola and Mercy (who got two strikes for acts of misconduct), seemed to have cooled off a bit with their arguments as they tread softly during the week while seeking the support of viewers, who decide the ultimate winner.

However, the tranquility experienced did not in any way halt the shouting matches in the house between Omashola, Seyi and Frodd.

Nicknamed the ‘slow tiger’, Frodd retained his trait of not hesitating to express his emotions whenever he feels hurt and he did so on Wednesday in his altercation with Omashola and Seyi.

As for Mike, he has seemingly opted to be the ‘classic man’. He had been calm, unassuming and supportive of his fellow housemates, irrespective of the competition. He, however, spiced up his behaviour during the final week, as he frequently uttered some of the slangs he had learnt in the house, to the surprise of viewers. It seems someone’s socialisation process with the Nigerian culture has happened just fine.

If reactions on social media are anything to go by, then the finalists can be said to be the most formidable of the housemates, deserving of their place in the final week of the competition.

With the finish line moments away for the Pepper Dem gang, who will be declared the last housemate standing this evening? The answer is blowing in the wind!