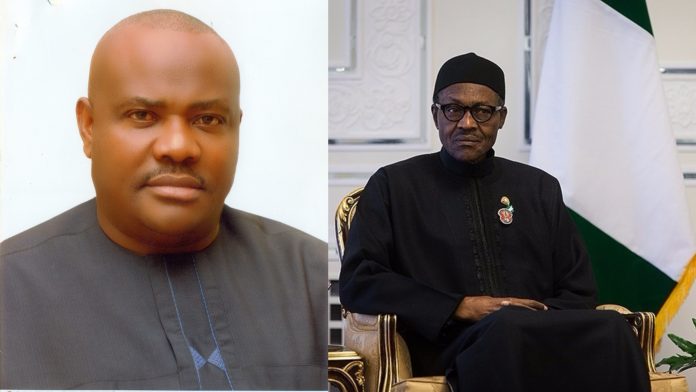 Another move in Wike’s growing romance with APC that annoys Atiku, unsettles PDP

Days after congratulating President Muhammadu Buhari for defeating PDP’s candidate Atiku Abubakar at the presidential election tribunal, Gov. Nyesom Wike has made another pass at the APC.

According to him, Fayemi is the good thing that happens to Nigeria.

“My brother, the Chairman of NGF, Governor Fayemi is a great leader,” said Wike during the commissioning ceremony to which he invited Fayemi in Port Harcourt.

“He is one of the few leaders who understand that a political party is a vehicle to get into government and that party affiliation should not bring animosity, especially when development is the focus.”

The PDP governor was impressed the way the APC governor and chairman of Nigeria Governors Forum helped him weather the storm over a mosque demolition in Port Harcourt recently.

Kano Gov. Umar Gaduje had flared up, threatening to sue Wike for tht action. Wike ,too, had responded, calling the governor Gandollar ( a sarky about the governor stuffing dollars in his babanringa in a video last year) and incapable of pocketing him.

“He called me when he heard about the development,” said Wike. “He came here and intervened in the matter, not minding our political party affiliation. That is leadership. And such a leader should be encouraged.”

Fayemi, too, as the guest of honour, hailed Wike for his development efforts in the state.

He said he was impressed by the PDP governor’s penchant for people- oriented projects, which has earned him the nickname “Mr Project”.

This mutual appreciation has further fuelled speculations about Wike dumping his party, which he described as corrupt, for the APC.