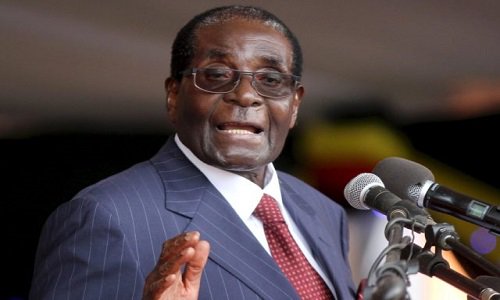 An avalanche of tributes on Friday trailed the death of the first president of independent Zimbabwe, Mr. Robert Gabriel Mugabe.

Mugabe, 95, died while receiving treatment in a Singaporean hospital.

News of the death was broken by his successor and long standing ally, President Emmerson Mnangagwa.

“It is with utmost sadness that I announce the passing of Zimbabwe’s founding father and former President Robert Mugabe,” Mnangwana said on his official Twitter platform.

Zimbabwe, according to him , has lost an icon of liberation and Pan Africanist.

“Cde Mugabe was an icon of liberation ,a pan-Africanist who dedicated his life to the emancipation and empowerment of his people .His contribution to the history of our nation and continent will never be forgotten .May his soul rest in eternal peace,”  he said.

President Muhammadu Buhari in a condolence message commiserated with family members, friends and political associates of the political activist who fought for the independence of the country from colonial rule, and lived most of his life in public service.

Buhari said  Mugabe’s sacrifices, especially in struggling for the political and economic emancipation of his people, would  always be remembered by posterity.

He was a man of courage, says Kenya’s Uhuru Kenyata

President Uhuru Kenyata of Kenya said: ”In this moment of sorrow, my thoughts and prayers go out to his family, his relatives and the people of Zimbabwe who, for many years, he served with commitment and dedication.

“Words cannot convey the magnitude of the loss as former President Mugabe was an elder statesman, a freedom fighter and a pan-Africanist who played a major role in shaping the interests of the continent.”

“Africa has lost one of its bravest and Pan-Africanist leaders who led by example in opposing colonialism.”

President Hege Geingob of Namibia said: “As Namibians, we owe President Mugabe a deep sense of gratitude for his immense and selfless contributions to the liberation of our country. The loss of the people of Zimbabwe is Africa’s loss.

President Cyril Ramaphosa of South Africa said: “South Africans join the people and government of Zimbabwe in mourning the passing of a liberation fighter and champion of Africa’s cause against colonialism.

“Under President Mugabe’s leadership, Zimbabwe’s sustained and valiant struggle against colonialism inspired our own struggle against apartheid and built in us the hope that one day South Africa too would be free.”

President Edgar Lungu of Zambia said: “I am saddened at the passing of a Pan-Africanist, Zimbabwe’s founding father and former President Robert Mugabe.

“He will be remembered for his fight for Africa’s liberation and standing up to fearlessly defend a continent he loved. His place in the annals of Africa’s political history is well assured.”

Obasanjo: he was  one of Africa’s greatest freedom fighters

Former Nigeria’s President Olusegun Obasanjo described Mugabe as an indomitable fighter who contributed in no small measure to the liberation of his country from apartheid and oppressive radicalism.

Obasanjo, whose military government in the late 1970s massively supported the liberation   struggle in Zimbabwe, said in a letter to President Emmerson Mnangagwa that he received the news of Mugabe’s death with immense sadness.

The deceased, he added, was “a frontline leader, an activist, an indomitable fighter for the liberation of Zimbabwe from apartheid and oppressive racialism, a statesman par excellence and a tireless advocate of the preservation of the mystique of Africa’s moral and cultural values who had selflessly dedicated himself to public service for most of his life, particularly as Prime Minister of Zimbabwe from 1980-1987 and also as President from 1987-2017.”

Britain:  Zimbabweans ‘suffered for too long’ under Mugabe

“There are mixed emotions in Zimbabwe today at the death of Robert Mugabe,” the spokesperson said in a statement.

He was ‘outstanding’ leader, China says

China, which was one of Zimbabwe’s strong allies during the struggle for independence, described Mugabe   as an “outstanding” leader of his nation’s liberation movement.

“Throughout his life, he firmly defended the sovereignty of his country, opposed foreign interference and actively promoted the cooperative relationship between China and Zimbabwe and China and Africa,” a Chinese Foreign Ministry spokesman said.

Putin: he made great personal contribution to the struggle

Russian President Vladimir Putin said: “Many important events in the modern history of Zimbabwe were associated with the name of Robert Mugabe,” according to the message published on the Kremlin website.

Putin said that Mugabe made a great personal contribution to the struggle for the independence of Zimbabwe and to the construction of institutions.

Nelson Chamisa , leader of Zimbabwe’s main opposition party-Movement for Democratic Change, said: “My condolences to the Mugabe family and Africa for the passing on of Zimbabwe’s founding President. This is a dark moment for the family because a giant among them has fallen. May the Lord comfort them.

“Even though I and our party, the MDC, and the Zimbabwean people had great political differences with the late former President during his tenure in office and disagreed for decades, we recognise his contribution made during his lifetime as a nation’s founding President.

Mpho Balopi, Secretary General, Botswana Democratic Party, said: “Comrade Mugabe was one of Africa’s most renowned freedom fighters and also one of the founding fathers of what is today known as SADC (the intergovernmental Southern African Development Community, whose headquarters are in Botswana).

“The history of our respective parties’ fraternal relations would be incomplete without mention of Uncle Bob, as he was affectionately known. It is beyond any doubt that he leaves an indelible mark on the politics of the region.”