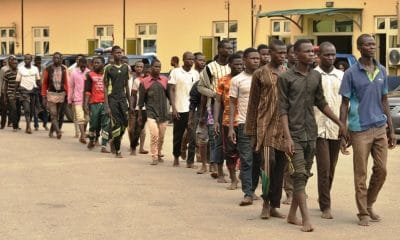 The arrest of 123 youth trucked into Lagos with 48 motorcycles is about sparking disaffection between Lagos Gov. Babajide Sanwo-Olu and his APC counterpart Jigawa Gov. Governor Muhammad Badaru Abubakar.

The young men, mostly from Jgawa, were detained and investigated Friday after the state taskforce was alerted of the mass movement.

The Jigawa governor did not take lightly to the arrest.

Badaru, in a statement by his Personal Secretary, Auwalu D. Sankara, on Saturday, said state government had already contacted the Lagos State Government over the ‘unlawful’ arrest of 123 okada riders who are indigenes of Jigawa State.

“After getting in touch with the officials of the Lagos state government, Governor Badaru, who was not in the country also spoke to the All Progressives Congress, APC, leader, Asiwaju Bola Tinubu, who assured of their unconditional release,” he noted.

The anner of thei entry to Lagos triggered suspicion, and Lagosians quickly alerted the police authorities in the state..