‘The Daily Show’ is an American late-night talk show that piques on satire and self-deprecatory humour to discuss socially and culturally relevant stories.

Burna Boy, on Tuesday night, appeared alongside Mark Sanford, a former US representative and former Governor of South Carolina.

News Agency of Nigeria (NAN) reports that the ‘African Giant’ performed hit tracks ‘Ye’ and ‘Anybody’, eliciting loud cheers from the audience.

He was dressed in a multicolored striped outfit, a pair of glasses and a neck full of diamonds while rocking his signature braids.

In an interview with Noah, Burna Boy explained the reasons for his outburst over the Coachella poster in January.

The incident, which birthed the ‘African Giant’ moniker, saw Burna Boy accuse Coachella of disrespecting him by writing his name in small fonts.

Explaining the situation to Noah, he said, “I am looking for my name and I can’t find my name. I am like – am I really performing?

“They had to circle it for me. That’s never happened to me before. I am used to being the African giant.

“I didn’t like it and I expressed myself. Not just for that but so, everyone that comes after me won’t have to go through that,” he said.

Trevor Noah noted that people might not understand Burna Boy’s huge influence as an artist in Nigeria and in Africa, the continent with one of the world’s largest population.

The 19-track album contains his biggest 2019 hits including ‘Killin Dem’ featuring Zlatan, ‘Anybody’ and ‘Dangote’ alongside a titular track ‘African Giant’ and several international collaborations.

Amongst the artists featured were Jorja Smith in ‘Gum Body’, Manifest in ‘Another Story’, Jeremih and Serani in ‘Secrets’.

Damian Marley and Angelique Kidjo in ‘Different’, Future in ‘Show and Tell’ and YG in ‘This Side’ were also featured. 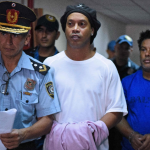