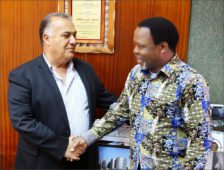 From Mount Precipice, located outside the southern edge, the ancient city of Nazareth spreads out like a painting on canvas. At night, the picturesque view transforms into thousands of tiny shiny light like stars in the sky. The mountain has made history and has also seen history being made. It was here, according to the Bible, an irate mob attempted to throw Jesus Christ down the cliff.

THE ancient town of Nazareth, with majority Muslim population, for two days, Sunday, June 23 and Monday, June 24, was agog as people from more than 50 countries of the world stormed the birth place of Jesus for a Christian religious programme tagged: “Nazareth Meeting T.B.Joshua”. The event was held at the newly constructed amphitheatre on Mount Precipice.

More than 50 luxury and sprinter buses were put to use, conveying people to and fro the mountain. Tens of police personnel and private security providers were also on hand to ensure there was no breakdown of order. Vehicles were parked kilometres away from Mount Precipice, while every visitor assessed the mountain using the bus shuttle. Due to well organized logistics, there was no breach whatsoever.

Although it was a 4pm to 8pm programme, as early as 11 am, many were already at the entrance of amphitheatre at the mountain top waiting for the gate to open.

The Mount Precipice amphitheatre, built and donated to the town  by Prophet TB Joshua and his Emmanuel TV partners, has a capacity of 40,000. It was filled with equally thousands sitting on the plastic chairs provided at the overflow.

Prophet TB Joshua’s message was titled: We Are Known By Our Love. He urged the congregation to love one another irrespective of religion or race and that love comes from God.

“How do you access love, by the practical things in our lives. We assess our love for God by the number of times lovingly think of Him daily, by the degree of hunger we have to read His word. The more we love Him, the more precious His word will become.”

The climax of each day’s programme was the prayer line where thousands of people from different continents with different  diseases were prayed upon.

The very well organized programme with very tight security and excellent crowd management also saw many natives of Nazareth among the crowd. The natives and tourists trooping to the town to see the birth place of Jesus, were confessing seeing the manifestation of the power in the name of Jesus Christ.

One of the natives at the event, Roger Wakim, a Christian Arab and a member of the Mother Church of the Holy Spirit in Nazareth Illit summed up the experience. “This is the experience when Jesus was on earth in Israel. He was sent to start ministering at the age of 30. For three and half years he was casting out demons and healing the sick. Deliverance and healing go side by side. Whenever there is deliverance, there will healing.”

Once of those who testified receiving their healing was Pastor Gregory Englert, an Indian based missionary.  He said: “I was hit  by a car. From then on, I started to have headache; my neck would go out of place and my back would go out of place, things like that. I started treating the ailment, but the treatments only give me temporary relief. It would periodically come back. It would leave and then come back. So, that was the problem. I also had some breathing problem, allergies and so on. It was glorious to come here.”

Asked why he decided to travel to Israel, he said: “I have read testimonies; I have equally seen people that go to Prophet T. Joshua crusades. They get the results that they’ve been looking for, or they will get the answers and reasons for certain things in their lives and the solutions. Whatever the problem, it will come to a grinding halt. So, I wanted to come here. I have attended many prayer conferences without getting the solution, but if there was any chance, I would have gone to Lagos, Nigeria because thousands go weekly in and out. I had to get a letter of invitation. So, this opportunity came. Just a week ago, I was there in the United Kingdom and I told God I would love to attend this event.  And he made this a reality.”

The Mayor of Nazareth, Mr. Ali Salam, said the visit and meeting of Prophet T.B. Joshua supports the city economically. His words: “This visit supports the city economically and some defeated politicians in the recent electoral battle, who are trying in vain for relevance, are now working to impede my work on peace. In order to support their weak position, they claim I receive and praise those who claim prophecy.

“If you want to fight for peace, fight with funds not lies and fabrications. The people of the city will not fall into the trap you are trying to build. They love the mayor who works day and night to raise the city economically, culturally, ethnically and educationally.”

Throughout the two-day meeting on Mount Precipice, there was no protest, no security breach and no accident.  The mountain has made history, and has also watched history being made.  It was on this mountain, the Bible recorded, that mob attempted to throw Jesus Christ from the cliff.