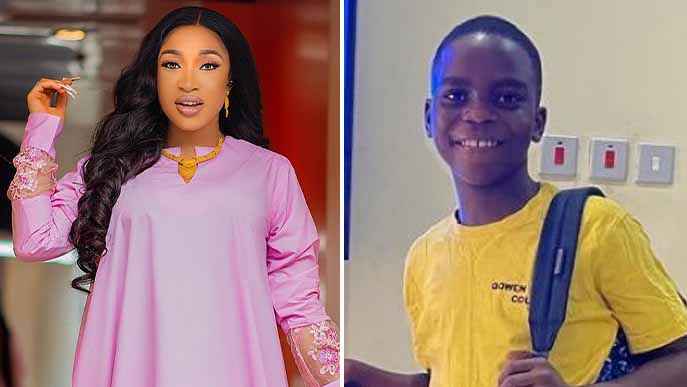 Nollywood actress, Tonto Dikeh has taken to social media to warn parents to train their children right or face the consequences of their negligence.

Tonto Dikeh stated this after the Lagos State Government exonerated the ten persons accused of being involved in the death of 12-year-old Dowen College student, Sylvester Oromoni Junior.

KanyiDaily recalls that five students and five staff were charged with the alleged murder of Sylvester Oromoni, who was allegedly bullied in Dowen College for refusing to join a cult.

On January 5, Lagos State Government exonerated the suspects, saying that police investigation and the two autopsies conducted on the body of the deceased failed to establish any prima facie case against the accused.

Reacting on her Instagram page, Tonto Dikeh warned parents to train their children well because she will not take easy with any child who hurts her son, King Andre.

She wrote, “Dear Parents, train your children well, train them well because I wouldn’t tolerate a pinch in your child hurts mine. I’ll burn down your generation. I’ll make you feel my pain 100 times over. Tell your children to avoid mine.

“Just woke up from a dream about #JUSTICEFORKEREN AND #JUSTICEFORSLYVESTER. If I am been tormented by the knowledge of these cases , how much more the Families. GODDDDDDDDDDDDDDDDDDDDDDD 😢😢😢😢😢😢😢😢😢😢😢😢LETS BE DELIBERATE ABOUT BRINGING UP YOUR CHILDREN UPRIGHTLY.”

KanyiDaily recalls that Sylvester Oromoni Junior’s father had vowed not to bury his deceased son even if takes him 30 years to get justice.