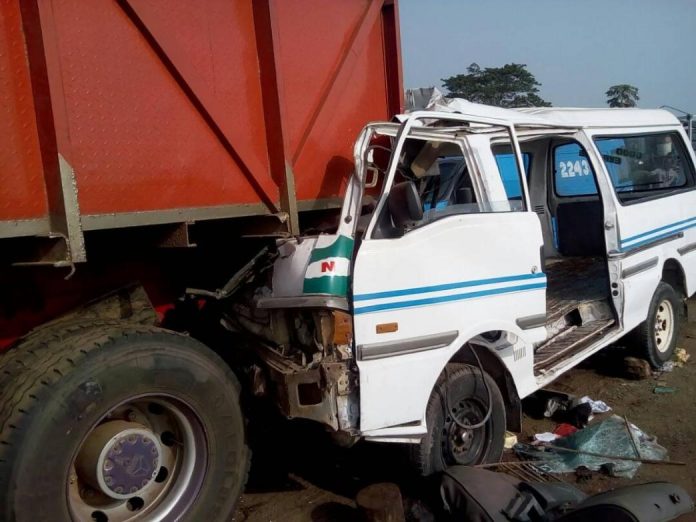 No fewer than eight persons died while a pregnant woman and a child sustained injuries in an accident involving a blue Toyota Corolla Sport car and a parked truck around the Ewekoro Area on Lagos/Abeokuta Expressway.

According to him, t the accident which occurred around 12:50 p.m. was caused by excessive speeding and loss of control by the driver.

He said that 10 persons made up of four males, four females and two children were involved in the accident that killed the eight persons leaving a pregnant woman and another person injured.

“We learnt that the Toyota Corolla Sport vehicle was inbound Abeokuta on the Lagos/Abeokuta Expressway when the accident happened.

“The driver of the Toyota marked AKD 649 FP, who was drunk and on excessive speed lost control of the vehicle and rammed into a stationery trailer parked on the road.

“Though the driver of the trailer was not in the vehicle when the accident happened, he reported and is presently at Ewekoro Divisional Police Station with the vehicles involved,’’ he said.

Mr Akinbiyi said that the remains of the deceased had been deposited at the General Hospital Morgue in Ifo Local Government Area of the state.

He said the injured pregnant woman and a boy were receiving medical treatment at the Federal Medical Centre (FMC), Idi-Aba, Abeokuta.

Oluwo of Iwo Oba Abdulrosheed Adewale Akanbi, Telu I, The Oluwo of Iwo has condemned the practice of family…

Oluwo of Iwo Oba Abdulrosheed Adewale Akanbi, Telu I, The Oluwo of Iwo has condemned the practice of family…

Agboola Ajayi, Ondo deputy governor Members of the Ondo State House of Assembly have served impeachment notice to the…

Agboola Ajayi, Ondo deputy governor Members of the Ondo State House of Assembly have served impeachment notice to the…