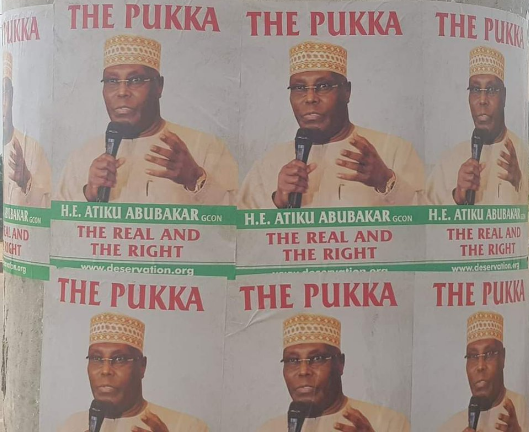 Atiku Disowns Posters Of Him With ‘Strange’ Inscriptions Circulating In Abuja

The presidential candidate of the Peoples Democratic Party (PDP), Atiku Abubakar has disassociated himself from the fresh campaign posters with strange inscriptions that have been circulating in Abuja.

KanyiDaily reported that fresh posters of Atiku with the inscriptions: ‘The Real And The Right’ surfaced on Tuesday. The posters, which also bore ‘Pukka’ a Hindi word, which literally means ‘Genuine’ were seen in the Central Business District within the Abuja City Centre.”

Atiku in a statement issued on Wednesday by his media aide, Mr. Paul Ibe, disassociated himself from the posters saying: “The campaign season is over and the tainted electoral victory by the incumbent is being challenged in court.”

“Our attention has been drawn to posters of His Excellency, Atiku Abubakar, presidential candidate of Peoples Democratic Party in the 2019 election being circulated in Abuja.

“We disassociate the former vice president of Nigeria from the said posters in circulation.

“We refuse to be distracted, which is exactly the objective of our opponents, but to remain focused on diligently pursuing our election petition with a view to retrieving the stolen mandate.”