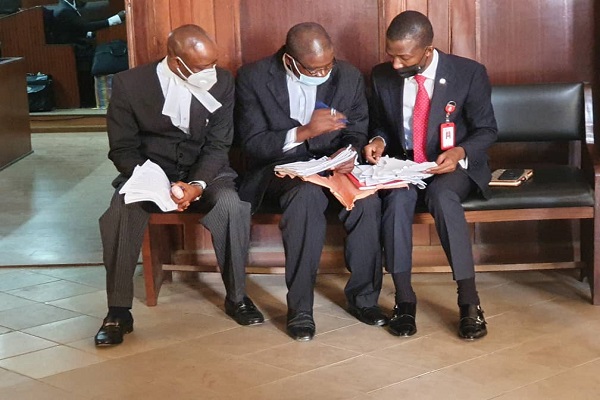 Chairman of the Economic and Financial Crimes Commission, EFCC, Abdulrasheed Bawa on Wednesday appeared before an Ikeja High Court to give evidence in a N1.4 billion fraud trial involving an oil company, Nadabo Energy and its Chairman, Abubakar Peters.

Bawa, who is testifying as the fifth prosecution witness, PW5, had begun his examination-in-chief on June 3, 2015

The EFCC had accused Abubakar Ali Peters and his company, Nadabo Energy of allegedly using forged documents to obtain N1,464,961,978.24 from the Federal Government as oil subsidy after allegedly inflating the quantity of premium motor spirit, PMS purportedly supplied to 14,000M.

The defendants had pleaded not guilty to the alleged fraud charge.

Bawa during previous proceedings, had also told the court that, after studying the documents submitted to the Petroleum Products Pricing Regulatory Agency (PPPRA), where the defendants claimed they imported about 14,000 metric tonnes of premium motor spirit, PMS, the EFCC conducted investigation, which revealed the contrary.

Also at the last sitting on February 23, 2021, Justice Balogun had admitted in evidence an email correspondence between Bawa and Ullrich Afini Awani of Global Commodities African as well as the Certificate of Identification.

Led in evidence by the prosecution counsel, Saidu Ateh, during resumed proceedings, the EFCC boss further narrated to the court how the fraud was perpetuated.

Bawa told the court that he analysed the email correspondences of the defendants and that contrary to their claims, they took about six million litres of Premium Motor Spirit (PMS) from the mother vessel, MT Evriduk, into their own chartered vessel, MT St. Vanessa.

He said the email further confirmed that the same quantity was discharged at Port-Harcourt.

“In addition, the email also informed us that one Mr Jideofor Akpan was the agent of the vessel

“We invited the said Akpan and during the course of our interrogation with him he confirmed that the first defendant through the second defendant deferred the vessel and paid for it.”

He said Akpan volunteered the statement to the EFCC and also submitted several documents to the agency.

The EFCC boss testified that during the interview, he presented the purported shipping documents, which the defendants submitted, to the Petroleum Products Price Regulatory Agency (PPPRA) for payment of subsidy to Mr Akpan.

“We presented it to him to confirm to us whether or not the vessel that he is the agent for, had anything to do with the vessel called MT American Express.

“MT American Express is the vessel the defendant claimed to have given the product to his own vessel.

“My Lord, Mr Akpan confirmed to us that MT St. Vanessa had nothing to do with MT American Express, rather, St. Vanessa loaded product from MT Evriduk,” Bawa said.

He testified that he wrote a letter of investigation to Petrocam, the trader that supplied the defendant with the petroleum product.

The EFCC chairman told the court that a request was made in the letter for all the financial and shipping documents in respect of transactions with Nadabo Energy.

“My lord, Petrocam responded to our letter in writing, attaching all requested documents which include a proforma invoice, commercial invoice, letter of credit and bill of laden,” he said.

Bawa said that the EFCC also wrote a letter of investigations of activities to the Corporate Affairs Commission (CAC) to confirm the registration status of Nadabo Energy.

He said the CAC responded in writing by forwarding Certified True Copies (CTCs) of all the documents requested.

“On receipt of the response, we studied it and found out that the second defendant (Peters) is a shareholder as well as a director of the first defendant.

“My lord, in furtherance to that, we invited two of the directors and shareholders of the first defendant, namely – Mr Akeem Abalaka and one Mr Sanni.

“They both confirmed to us that although they are linked to the company, they are not involved in the contentious matter before this honourable court,” he said.

During Bawa’s testimony, the EFCC sought to tender to the court, the CTCs of the documents it received from Petrocam and the CAC.

Defence counsel, Mr E.O. Isirameh, however, objected to the documents which included proforma invoice, letter of credit and other documents relating to the transaction.

The defence also raised objections to the admissibility of the response of the CAC with respect to the investigation of the company.

Isirameh argued that the documents were invalid, saying that they were produced by the prosecutors several years after the subsidy transaction occurred.

Justice Christopher Balogun adjourned the case until April 28 and 29 for ruling and continuation of hearing.