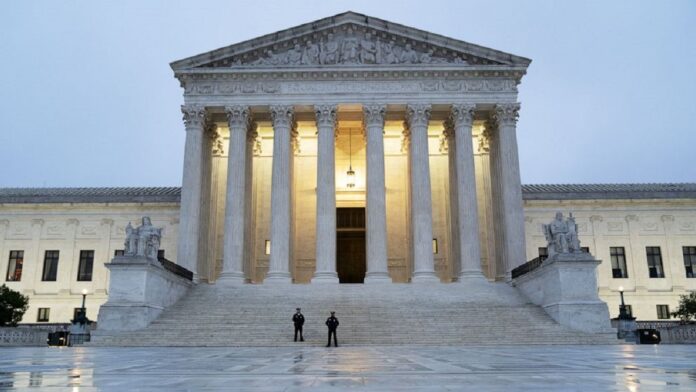 The U.S. Supreme Court on Friday rejected a lawsuit brought by the state of Texas that sought to overturn the results of the presidential election by invalidating millions of votes in Pennsylvania, Georgia, Michigan and Wisconsin.

The lawsuit, which was joined by 17 states President Trump won in 2020, asked the court to allow the legislatures in the battleground states where the Trump campaign is contesting results to appoint new electors. But the court declined to take up the case, delivering what may be the death knell to Trump’s reelection fight.

In a decision issued Friday evening, the court denied the complaint for “lack of standing,” meaning Texas did not succeed in showing that it has a vested interest in the manner in which other states conduct elections.

Texas Attorney General Ken Paxton, a Republican, filed the Dec. 7 complaint against the states, which had certified Joe Biden as the winner, alleging multiple baseless claims. Those allegations — such as widespread voting irregularities and the unsubstantiated claim that Biden’s lead in those states is statistically improbable, specifically, a less than “one in quadrillion” chance — had already been the basis for numerous unsuccessful state and federal lawsuits.

The defendant states responded to the complaint on Thursday, basically arguing what the court concluded Friday — that Texas doesn’t have the standing to sue over how other states conduct elections.

“Nothing in the text, history, or structure of the Constitution supports Texas’s view that it can dictate the manner in which four sister States run their elections, and Texas suffered no harm because it dislikes the results in those elections,” Pennsylvania’s brief said.

In a statement issued after the ruling, Paxton said it’s “unfortunate” that the court decided not to take the case, and added that he’ll “continue to tirelessly defend the integrity and security of our elections and hold accountable those who shirk established election law for their own convenience.”

From the moment the case was filed, legal experts dismissed it as meritless, saying that if Texas is allowed to sue over other states’ election procedures, then theoretically any state can legally concern itself with how another state operates its elections.

“If we were to allow states to start challenging one another, in a kind of massive intra-family dispute among sister states, there would be no end to it,” Laurence Tribe, a Harvard University law professor and constitutional scholar, told Yahoo News on Wednesday. “Texas might say we don’t agree with the way Georgia counted its votes. Michigan might say we don’t think that Alabama did it right. It would be endless.”

After the Supreme Court decision, Pennsylvania Attorney General Josh Shapiro, who has been a vocal critic of the Trump campaign’s fraud claims, said on Twitter that the court “saw through this seditious abuse of our electoral process.”

“This swift denial should make anyone contemplating further attacks on our election think twice,” he said.

Michigan Attorney General Dana Nessel said the court’s decision is “an important reminder that we are a nation of laws, and though some may bend to the desire of a single individual, the courts will not.”

Several parties filed briefs supporting the complaint, including 18 Republican attorneys general, and Ohio, which filed a brief asking the court to render a ruling but said it does not support either side. Trump filed a motion to intervene on Dec. 9.

More than 120 Republican House members signed a brief in support of the Texas case, saying that “the election of 2020 has been riddled with an unprecedented number of serious allegations of fraud and irregularities. National polls indicate a large percentage of Americans now have serious doubts about not just the outcome of the presidential contest, but also the future reliability of our election system itself.”

The brief did not appear to mention the unsubstantiated, bad-faith allegations that have been pushed by dozens of unsuccessful lawsuits. No credible evidence of systematic, widespread voter fraud or of a Democratic-run scheme to steal an election has been presented in any case.

Not all Republican lawmakers supported the complaint. Sen. Ben Sasse, R-Neb., said in a statement after Friday’s ruling that “since election night, a lot of people have been confusing voters by spinning Kenyan Birther-type, ‘Chavez rigged the election from the grave’ conspiracy theories, but every American who cares about the rule of law should take comfort that the Supreme Court — including all three of President Trump’s picks — closed the book on the nonsense.”

In the Supreme Court decision, Justices Samuel Alito and Clarence Thomas, who were appointed by Republican presidents, both said they would have granted the motion to file the complaint “but would not grant other relief” because they believe the court does not have the discretion to deny the filing of a complaint that falls within the court’s jurisdiction.

A spokesperson for Biden said the decision is “no surprise.”

“Dozens of judges, election officials from both parties, and Trump’s own Attorney General have dismissed his baseless attempts to deny that he lost the election,” Michael Gwin said in a statement shared on Twitter.

The ruling comes just days before the state’s electors are scheduled to meet in their respective states on Dec. 14.

“President-elect Biden’s clear and commanding victory will be ratified by the Electoral College on Monday,” Gwin said, “and he will be sworn in on January 20.”