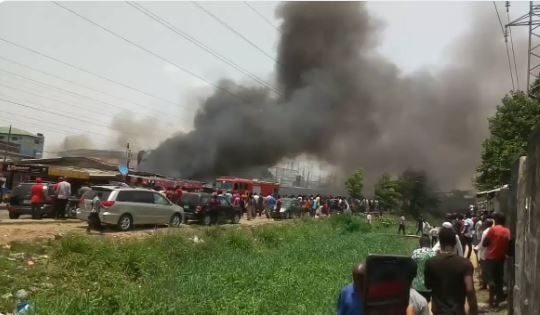 A huge fire has reportedly broken out inside a building in Surulere, Lagos, sparking serious panic in the place.

According to a report by The Nation, there’s been a fire outbreak in a building in Babs Animashaun, Surulere, Lagos.

The fire reportedly broke out on Thursday after a gas explosion.

The extent of the damage is yet to be confirmed but numerous cars were reportedly gutted by the blaze.

LIVE. please fire service is here already but they came with just one vehicle, please let help out by continuing to call them so they can come with more vehicle to put off the fire. #CensusMarket#Surulere pic.twitter.com/fZj3sEvNOO