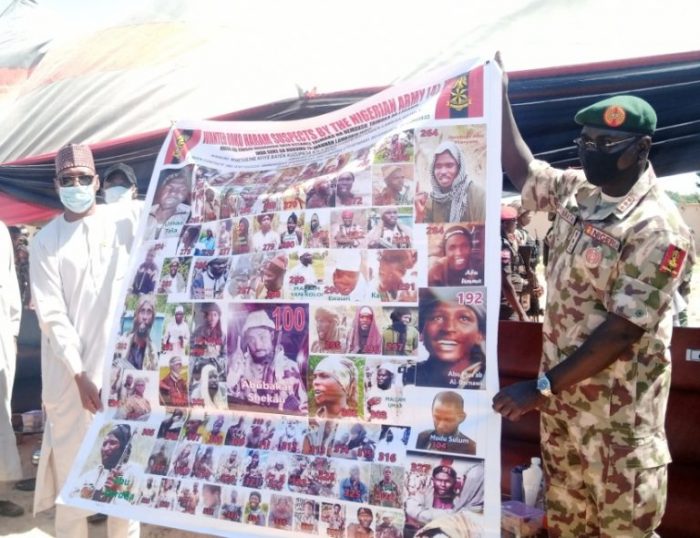 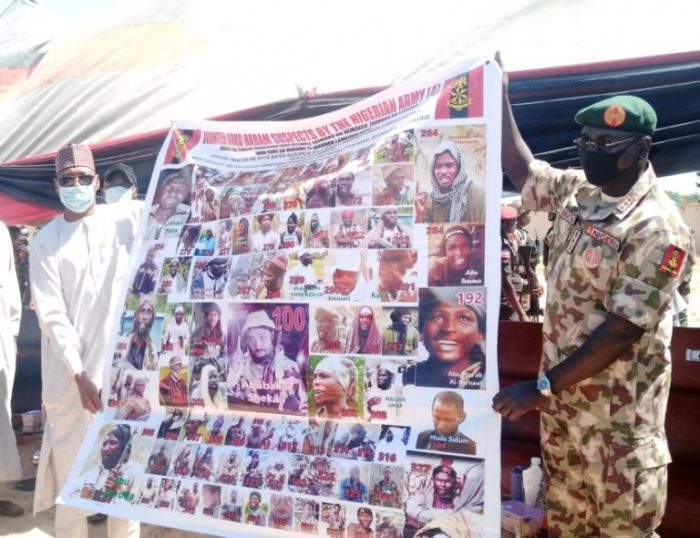 The Nigerian Army has declared 81 terrorists of Boko Haram and ISWAP wanted. At the top of the pictorial list are Abubakar Shekau and Abu Al-Barnawi.

The army also announced today that it has co-opted more Civilian Joint Task Force (CJTF) members into its operation.

The suggestion was made to the army over six years ago, by former French President, François Hollande.

A banner showing photographs of the wanted terrorists was unveiled by Governor Babagana Zulum of Borno and the Chief of Army Staff, Lt.-Gen. Tukur Buratai.

The ceremony was held on Wednesday at the CJTF Super Camp Chabal, near Maiduguri.

The army did not indicate whether it will reward informants. But the United States since 2012 placed a bounty of $7million on Shekau.

Apart from Shekau and Barnawi, other terrorists listed in the army poster are Ibrahim Maryam and Abu Sulum.

Some of the wanted terrorists on the current list had been on the watch list since 2016, while others were declared wanted for the first time.

The Chief of Army Staff, Buratai said the that some of the terrorists that had been declared wanted since 2016 have either been arrested or killed in various operations while some are still on the run.

He called on members of the public as well as the CJTF to support the army in fishing out remnants of the Boko Haram terrorists that were still hiding and operating within their localities.

Buratai also urged the troops to continue to deal decisively with the terrorists that were hiding in the forests.

According to him, the state government’s CJTF is partnering with the Nigerian army to ensure the final onslaught on the Boko Haram terrorists.

The Chief of Army Staff said that the history of CJTF dated back to the 18th century in Europe during wars where it was discovered that the volunteers were very key to the various wars that they had fought.

He said that the CJTF had been a major factor in the counter insurgency operation in the North East, adding that they were instrumental to chasing of terrorists from towns into the forest and bushes.

According to him, their knowledge of the terrain and that of the individual Boko Haram members across states of the North East is very key.

“As we collaborate today, this counter insurgency should not be left for the military alone as its success does not fully lie with the military.

“The collaboration with the civil authority as well as the volunteers is a welcome development,” he said.

The COAS commended the governor for his effort in gathering the volunteers toward ensuring that the people return to their communities.

He assured that the collaboration between the military and the CJTF as well as other security agencies would ensure the actualisation of the resettlement plan of the government.

According to him, elaborate arrangement has been made for their welfare as well as the equipment for them to operate effectively.

He added that the CJTF would be the stabilising force that would change the course of the counter insurgency operation in the North East.

Earlier, the Theatre Commander, Operation Lafiya Dole, Maj.-Gen. Farouk Yahaya said the incorporation of the Civilian JTF into army operations was aimed at harnessing the skills and competence of the personnel in terms of the terrain and environment which were essential ingredients in fighting insurgency.

Yahaya said the members of the CJTF would also help in identifying the wanted terrorists.

He commended the effort of the state government in assembling members of the CJTF to support the military in achieving its objectives.

According to him, the CJTF assembled here is a comprehensive plan of the COAS to key them into this operation and that is why we already have guidelines for their operation and conducts among others.

Zulum, while commending effort of the military in the fight against insurgency, announced the donation of additional 100 motorcycles for the operation of the CJTF.

He also pledged to continue to collaborate with the Nigerian army in his effort to resettle the displaced persons by the insurgency to their ancestral homes.