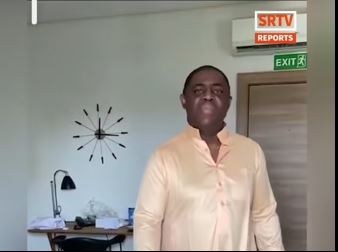 Chief Femi Fani Kayode, a former Aviation Minister and a chieftain of the people’s democratic party, PDP, has been caught on camera in a heated argument with his estranged wife, precious Chikwendu.

Recall that Chief Fani-Kayode had, in a report published by Vanguard, denied claims of domestic violence and abuse leading to the break up in the union that has produced four adorable boys, including a triplet.

In this exclusive Video published by Sahara Reporters, Fani-Kayode seems to have accused Precious Chikwendu of always bringing about a crisis in the relationship while he seeks for peace.

Precious Chikwendu, however, in the video claimed that the former minister is in the habit of abusing her.