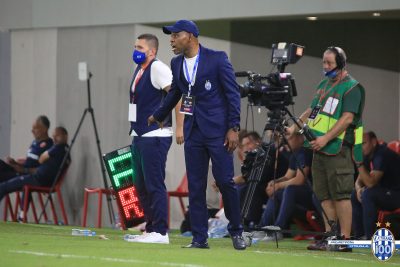 Egbo: Self-Belief Will Be KF Tirana Weapon In Europa Clash Vs Young Boys

KF Tirana of Albania Nigerian-born coach, Ndubuisi Egbo has exclusively told Complete Sports that his players’ belief in their abilities is the strongest weapon they are banking on to upstage Swiss giants, Young Boys, in the last qualification match of the 2020/2021 UEFA Europa League.

The winner of the epic class, billed for the 32,000- capacity Stade de Suisse in Bern, Switzerland , on October 1, will earn a berth in the group stage of Europe’s second tier club competition.

Egbo’s Tirana saw off Serbia’s Dymamo Tbilisi 2-0 to earn the spot for the clash against Manager Gerardo Seoane’s Young Boys.

Egbo says playing in the Europa League will be a huge manifestation of the experience and confidence his boys have garnered playing in the Champions League.

“We believe in ourselves. We always believe we can do it. And when the confidence in the players is high, result comes,” Egbo told Complete Sports.

KF Tirana were eliminated from the more prestigious UEFA champions League 1-0 by Red Star Belgrade inside their Arena Kombetare.

Despite the defeat which saw them down to the Europa League, former Super Eagles goalkeeper, Egbo, says he is proud of his team and himself.

“Red Star Belgrade are strong by all standards in Europe. I wanted us to win, but losing to such a big team by 1-0 speaks volume of the quality and potential of our team,” he said.

“Now, the players have grown more in confidence and are good to roll against any team now.

“Young Boys are a big team in Europe, but I’m optimistic my players will match them toe to toe.

“For me, it is joy and pride coaching this team in the European competitions.”

Egbo added: “In 2004, I played in the European continent with them as a player then.

“Now, I’m leading them back in the continent as a coach and I’m pleased about that.”

Egbo, a onetime Enugu Rangers and Julius Berger of Lagos goalkeeper reveals that standing in the KF Tirana dugout in the European Championships has shut him more into Albanian public glare and acceptance.

“Sometimes, when I walk along the road, the Police, aged people between 80-90 years old, would stop me and ask ‘are you the coach of KF Tirana?’.

“Yes, not everybody would be your fan. It’s also the same back home in Nigeria.

“But I must say about 90% of the fans here are right behind me and I’m happy about that,” Egbo said.