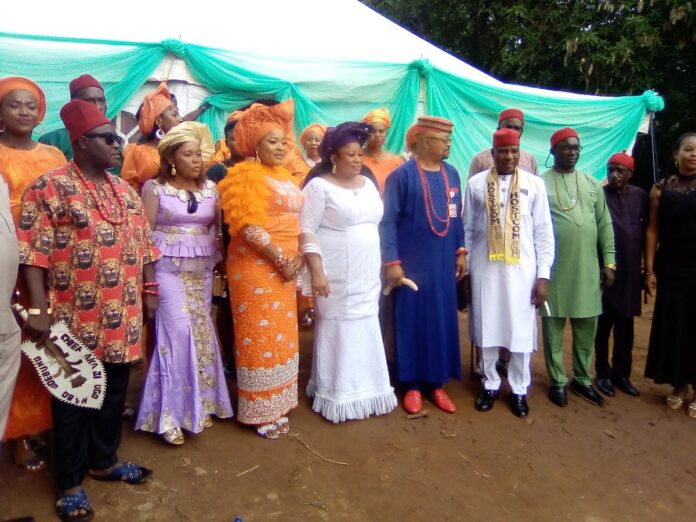 The plea was heightened at the weekend during the burial ceremony of Late Chief Godson Udoh Egbenadiji a member of the late Igwe Peter Ezenwa (Eze Okpoko of Oba) royal cabinet.

Late Udoh Egbenadiji was a brother to Hon Barr. Ebele Ejikeme, Senior Special Assistant,  SSA to Governor Obiano on Political Matters for Idemili South, and the father of Hon Ifeanyi Udoh (Executive Assistant. EA to the Governor on Youth Mobilization..

The Umuoji-Oba-Akwuukwu road which traverses towards Udoh’s compound was in a sorry state as condolence visitors drove to the burial ceremony which attracted the high and mighty from across the State.

“I wished that your motorcade got stuck in this road while coming to this place, perhaps it will provoke you people in government to expedite work on this road that has become impassable”, Igbalueogige taunted.

“Oba people voted for Obiano during his first and second tenure elections. We plead with Akpokuedike to rescue us by completing this road abandoned by contractors as he promised”, said Ndozie.

Ogilisi Igbo, Chief Rommy Ezeonwuka said that Governor Obiano promised to tar at least 1km of the road within Oba and construct the bridge linking Umuoji and Oba, adding that it could be completed after the rains.

Also, Chief Ufondu Obi after eulogizing his Excellency on his achievements said that Oba people were counting on him not to disappoint them as some of his predecessors who utilized the road for mere political campaigns did during their own regimes.

Transition councilor for Oba Ward 1, Hon Ebuka Chibueze after thanking Governor Obiano for many dividends of democracy enjoyed by Oba community assured that nothing will stop the completion of the road.

Meanwhile, Youth leader Oba Zone E, Charles Agha in his tribute described Late Udoh as a peace loving gentleman who has been advising youths to desist from illegal land grabbing and speculation.

Former PG Aboji Akanano, Chief Samuel Obianyo described the deceased as a friend indeed who came to his rescue financially when he had a police case at force headquarters, Abuja.

Moreover, Mr. Okechukwu Ugwunze a niece to the bereaved was nostalgic about his uncle describing Udoh as one that always stands for the truth no matter whose ox was gored.

However, Barr Ejikeme described his late brother as his best friend, confidant and adviser saying that the family did their best to take care of him while he was sick but God took him.

Concerning the abandoned road, “This road cannot be abandoned everything is set via the ministry of Works to mobilize the contractors back to this road as soon as the rainy season stops”, said the SSA.

The EA and deceased eldest son, Ifeanyi Udoh also assured the people that his  Excellency cannot forget his promise thanking the people who came despite the road, the whether and pandemic to commiserate with their family.