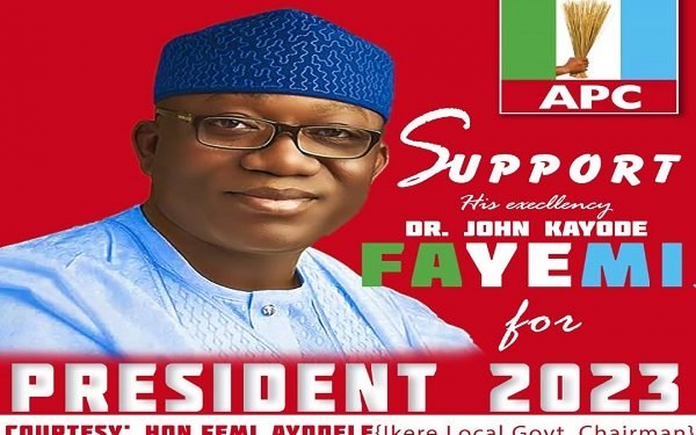 2023: After el-Rufai’s call for southern presidency, Fayemi’s posters finally out, no denial

After Kaduna Gov. Nasir el Rufai has repeatedly declared his support for a southern president in 2023, his counterpart and chairman of the Nigeria Governors Forum Gov.John Kayode Fayemi is out to as whom the cap fits.

Fayemi is not pushing himself forward, though.

Decked out in a fashion like the old sage the late Obafemi Awolowo’s, Fayemi had his picture on posters now flying all over social media, and he’s being projected on the APC platform.

The message is: Support His Excellency Dr. John Kayode Fayemi for President 2023.

And the sponsor, a bootlicker and chairman of Fayemi’s  Ikere LGA, has come out to defend it—unlike other instances where sponsors of potential aspirants  hide, leaving the candidates to start denying knowledge.

According to Femi Ayodele, the governor is fit enough for the top job, considering his array of outstanding credentials, administrative shrewdness and political acumen.

He also said that Fayemi’s commitment, resourcefulness and pedigree puts him in good stead to lead Nigeria in the next political dispensation.

Ayodele said he did the posters to show his unalloyed and uncompromising loyalty to Governor Fayemi against insinuation that he was working against him.

Gov. Fayemi has, however, denied knowledge of it.

His chief press secretary, Yinka Oyebode, said the sponsor was only expressing a mere personal opinion. Oyebode urged Nigeria to not take the posters seriously.

Another aide said it’s a misrepresentation of Fayemi’s conduct and personality.

But many Nigerians won’t buy all of that.

There have been speculations Fayemi is pressing his youth and prominence in the NGF—whose members like to back one of theirs for presidency—to run for the highest office in 2023.

It was even believed at a point he clashed with the APC national leader Bola Tinubu , another southerner and big shot in the APC, eyeing Aso Rock.