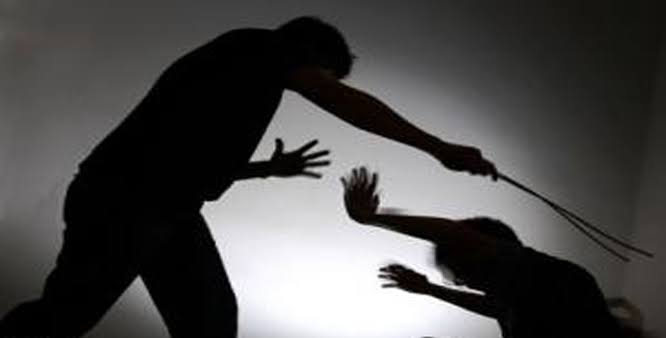 A video currently circulating the social media showed the moment a Nigerian dad was seen flogging his 18-year-old daughter for disobeying him by joining a group chat he warned her against.

In the video posted on Instablog9ja, the father is seen flogging the disobedient girl and repeatedly reminding her of his earlier warning not to join the unauthorized group chat.

The nature of the ‘group chat’ is not known but some Twitter users suggested it could be an adult group where the young ones are exposed to illicit sexual ideas.

Several users have shared different opinions over the act, with some condemning the dad for flogging the girl, while others believed the age of the girl does not matter when it comes to discipline.

Nigerian dad flogs his 18-year-old daughter for joining a group chat he warned her against pic.twitter.com/iiWnTaAoGQ

The video has triggered a lot of divided reactions among Nigerians as regards to whether what the father did to his daughter is right or wrong.

She’s 18 is an agenda of the Occidental culture. Nigeria is another realm entirely. Our culture will not overlook some things at 18.

The earlier you know this, the better for you.?

You condemned a father for not beating his 21 years old boy who didn’t sit for exam after paying $21k.

You are also condemning a father flogging his daughter because she’s 18.

For African parents, discipling you is not age bound. The nature might change as you age.

You’re Shouting She’s 18 But You’re 24 And Your Dad Still Whoops Your Ass,
Dont Come On Twitter And Be Forming Fake Woke

She’s 18. Fine.
She messed up. Fine.
You cane her. Fine.
Why must you make a video and upload on twitter?

You’re beating a child that’s 18 years old which means you’ve been beating that child since she was a kid. And now she’s 18 and she still doesn’t listen to you. That’s a failed parent

Most people under that tweet are blabbing “She’s 18, she can make her decisions, yen yen yen,… African parents this that..”
Agbaya, you should goan rent a self-con apartment for her, so she can go there and be making her own decisions.., ??

you’re spilling trash cos She’s 18 and her Dad is beating her but you’re 23 and can’t even tell your dad you have a boyfriend.

The same set of people that were condemning a dad for not beating that boy who didn’t sit for exam after his dad paid 21k dolls are that same one condemning a father flogging his daughter because she’s 18. Well continue

Some of you have forgotten we have a huge cultural difference with the western world. All this she’s 18 is a useless as Manchester city yesterday against arsenal.

A 5 year old American child after watching the flogging video.
Child : Dad, if you try that shit with me, You gotta have to spend the remaining of your miserable life at a correctional facility in downtown.

What’s the future of parenting for us ?? We need a plan , canes and slaps are not allowed anymore … notable slippers spanks is a No No… Are we subscribing to grounded oyinbo style??
She is 18?

I’m almost reaching 30 and my mom slapped me last week for jokingly calling her “queen of the Marine kingdom”. Small play ooo ???

After seeing this She’s 18 trend, I can only but conclude that parenting will be difficult in this our generation.

“Don’t beat the child instead talk to her, She’s 18.” We might as well start talking to criminals instead of putting them in Jail.

Even Jesus flogged people selling in the church and they were adults, he did not Sit them down to talk because there is time for everything.

Spare the rod and spoil the child, bible didn’t say you should stop when he’s or she’s 18. pic.twitter.com/nl5nRvAtnG

Forget that she’s 18 years, my dad will make her sleep outside for one week

KanyiDaily had also published a video that shows a father scolding his son over poor result, after paying $21,680 tuition fees for the boy at an expensive school in Zambia.