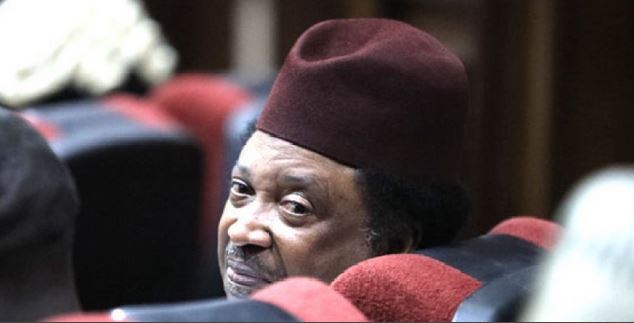 How Shehu Sani Asked For $20,000 To Bribe Magu – Witness Reveals

Alhaji Sani Dauda, a prosecution witness of the Economic and Financial Crimes Commission (EFCC), on Wednesday told a Federal High Court in Abuja how he refused to give a $20,000 bribe to the Acting Chairman of the anti-graft agency, Mr Ibrahim Magu.

According to Sun News, he made the disclosure at the resumed trial of a former Senator representing Kaduna Central, Senator Shehu Sani.

Testifying as the sixth prosecution witness (PW6), Dauda, who is the chairman of ASD Group of Companies and a board member, Peugeot Automobile Ltd, told the court that although he initially set aside the sum of $15,000 which he gave to Senator Shehu Sani, the bribe money was later increased to $20,000.

Dauda, who continued his evidence in chief on Wednesday through an interpreter, said Sani, who collected the $15,000 in an envelope on November 20, 2019, assured him that Magu is his friend and was ready to assist.

The EFCC is prosecuting the former senator on multiple-counts indictment of bribery, name-dropping, influence-peddling and an allegation that he obtained $25,000 from Alhaji Daudu.

The ex-senator from Kaduna was alleged to have collected the money from Dauda under the false pretence that it would be used to bribe Magu so as to shield the witness from investigation and prosecution.

The prosecution told the court that Sani also used false pretence and collected $15,000 from the witness under the guise that the Chief Justice of Nigeria approved that the money should be given to four judges and the prosecutor for them to hands off his case and that of his estranged in-law, one Abubakar Musa.

In his evidence, Dauda said: ‘He (Sani) called someone on phone and told me that the person was Magu. He told me that Magu said I should give him $20,000. I told him that I could not afford that. But he kept pushing me that if I don’t do it, there will be problem.’

He added that Sani switched off his phone upon collected the money and made himself unreachable.

‘He switched off his phone. I kept calling his phone but it was not going through, so I sent him a text three times and he did not reply. That was when I told myself that this man has cheated me.

‘I then went to a friend who took me to the CJN. And the CJN denied that he knew the Defendant or sent him to me. The name of that my friend is Mutalah. The CJN then did a press release that he doesn’t know anything about the matter. Since then, I did not see Shehu Sani and he did not call me.

‘He told me that he has collected the money back from the people and would have brought it if he knew I was back. When I returned from EFCC, Shehu Sani called me that he was coming and I told him that I was not at home. He came to my office and asked us to go inside.

‘When we were inside, he was seated on a chair. He then came and held me by the neck and was begging me that I should help him, that I know that he is a politician. My mother knows him. He begged me that I know that I am his godfather.

‘But when I was leaving the EFCC, they told me to make sure that I record my conversations with Shehu Sani. So everything he told me that day, he did not know that I recorded it. Around 10:30 in the morning, he brought the money to my house. When he brought it, he said this is your money $25,000.

‘I was very happy and came out to tell people that Shehu Sani has brought back my money. I then reminded him that the EFCC said he should report by 9 am and he should immediately go there. From then on, I did not hear anything again from him till he came to meet me in Kaduna with Dr Ibrahim, who he said is his brother. He told me that Ibrahim knew everything about the case.

‘That Sunday, I was on my farm when they called me that Shehu Sani has come. When I met him, he told me that Shinkafi said I should write a letter of withdrawal and he would take it to Magu.

‘I told him that I will not do that since I was the one that reported the case. He said if I agree, he will tell me what to tell the prosecutor to stop the case. After then, EFCC collected my two phones. They later kept back my Samsung and gave me back my iPhone but the $25,000 is still with EFCC.’

But under cross-examination by counsel to Sani, Mr Abdul Ibrahim, SAN, the witness said he was aware that giving of a bribe was an offence under Nigerian law.

‘You did not give bribe to Shehu Sani to give CJN in this case?’ he queried. The witness replied: ‘Shehu Sani didn’t tell me that it was a bribe.’

Asked if he knew the Defendant as either a staff of the Supreme Court or that of EFCC, the witness said: ‘I don’t know, after all, he is a senator.’