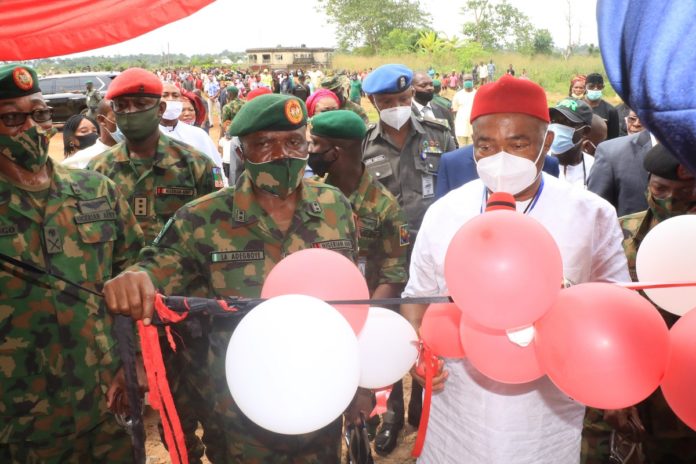 The governor who described the Nigerian Army as one of the best and brightest globally, said despite the paucity of funds at its disposal, the leadership has not shied away from fulfilling its civilian/military responsibility.

Said Governor: “Our people are very appreciative of this gesture. Government of Imo State appreciates that this community is one of the most neglected and with this, the Nigerian Army has opened the door for development and I invite other agencies of government to follow suit.”

The Governor promised continuous partnership with the Army and particularly the leadership for more development programmes.

Major General Adegboye who represented the Chief of Army Staff (COAS), Lt. General Tukur Buratai, said the choice of Amakohia-Ubi for the project was well thought out and that the Army will continue to extend developments to Nigerian Communities in the spirit of civil/military responsibility.

In his remarks, Major General Agugo who is an indigene of Amakohia-Ubi expressed joy and thanked Buratai for honouring him and his community with the project.

He also thanked Governor Uzodimma for being a father and for finding time to come and commission the projects with the Army.

In his welcome address on behalf of the people of Amakohia-Ubi, Mr. Kevin Uzozie, the National President, Amakohia-Ubi Community Development Union (ACDU) praised the Army for remembering them.

“As a largely agrarian Community that has relied solely on communal efforts to achieve development in the past, the location of these projects and your physical presence have, again, renewed our faith in government that we are still part of the establishment,” Uzozie wrote.

The Community therefore conferred on Buratai the traditional chieftaincy title of Dike Eji Eje Mba of Amakohia-Ubi (meaning a strongman and warrior whose strength and capacities are evident and honoured even in foreign lands).

The event was well attended by other important dignitaries from the Imo State government, including Commissioners and Legislators from the Community.