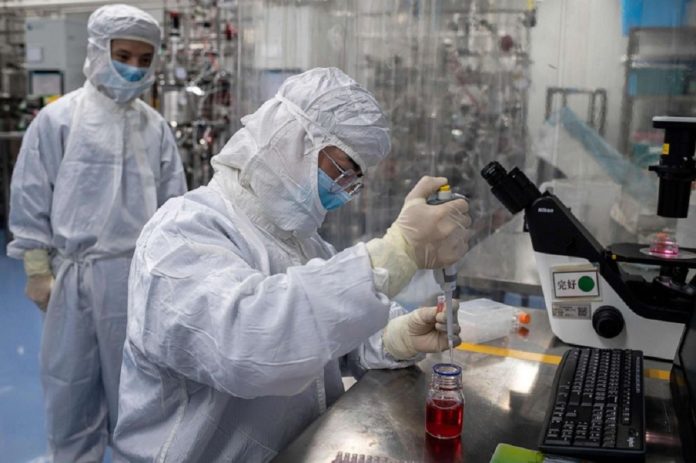 China company says its vaccine could be complete by ‘autumn’

A China-based pharmaceutical company claims its COVID-19 vaccine candidate is proving to be safe and effective on humans so far, citing early research. A senior member of the company said the vaccine could finish the last phase of human testing as early as this fall.

“The vaccine shows [protection] on animal models — on monkeys,” said Helen Yang, senior director of Investor Relations at Sinovac Biotech Ltd. “Currently, we are conducting the trial on humans and we expect some preliminary data for Phase I and Phase II to be available within this month.”

Sinovac Biotech is a pharmaceutical company with a history in vaccine development based in Beijing, China. Its vaccine, CoronaVac, is one of at least 11 approved for human testing worldwide, according to the World Health Organization.

“We were approved to conduct human trials, including children and senior citizens, but currently the trial is on 18 to 59-year-olds,” said Yang. “We are about to start the studies on the (elderly) and then, after that, we will conduct the trial on the younger population.”

Yang said the company is following the same three-phase testing protocol used in western countries and reports that so far they have tested 144 volunteers in phase I and 600 in phase II. Phase I is a small study in healthy adults to test for safety, whereas phase II is a slightly larger study testing for safety and effectiveness. Phase III is a study conducted on an even larger test group.

“The vaccine shows a good safety profile,” Yang told ABC News regarding their human trials. “We haven’t seen any severe adverse reaction after using our vaccines.”

Yang said the vaccine could finish phase III of testing by the fall — the final phase needed for the vaccine’s approval in China. Although, Yang cautioned, this timeline is dependent on the vaccine’s continued alleged success in human trials.

This is the same ambitious timeline being offered by the United States’ Operation Warp Speed which has a goal of a safe and effective vaccine available for Americans in January 2021.

The U.S. has several vaccine candidates in clinical trials and expects to have more by the end of the summer from a number of companies including Moderna, AstraZenaca/Oxford, Pfizer, Merck and Johnson and Johnson.

“Phase III trial needs to take a few months, at least,” explained Yang. “After we see the phase II, we will know how much of the antibody level can be induced by the vaccine, and then phase III will tell you if the level of antibodies will provide protection.”

The U.S. government has said any vaccine candidate it partners with as part of “Operation Warp Speed” would be available in America first and then any surplus may be distributed internationally. It’s not clear if China would make any of their vaccines available in the U.S.

Dr. Anthony Fauci, the nation’s top infectious disease expert, said that regulators in the United States and Europe have the most rigorous safety standards in the world for testing and developing new drugs and vaccines. Fauci was also more cautious about the expectations for a Chinese vaccine.

“I certainly don’t have as much confidence in what comes out of China than I do which comes out of the United States,” Fauci said in an interview with ABC News Chief White House Correspondent Jonathan Karl on “Powerhouse Politics” podcast. “I know from experience that the material that has come out of there has been material that has not been first rate.”

When asked if their leaps in vaccine development may be because of lax protocols in China, Yang said the company was “developing a vaccine based on the regulations from Chinese authorities.”

“In general, all the steps and required studies has been fully conducted, but we have a good mechanism that, after we have the data, we can immediately submit it — so we can have a more quicker review,” she added. “But it doesn’t mean that we miss any steps or reduce the standards.”

U.S. government officials recently briefed reporters and said that because Chinese scientists shared the sequence of the COVID-19 virus on January 10, an international effort, including literally overnight in the U.S., for a vaccine was started immediately.

When it comes to large phase III trials, vaccines are best studied in places where outbreaks are ongoing to ensure that enough people are exposed to the virus to prove the vaccine actually works. In China, the coronavirus epidemic is largely under control.

Sinovac announced this week a plan to conduct a phase III clinical trial in Brazil, where infections are increasing — a sign that the vaccine could be on track to begin phase III testing soon.

Sinovac’s vaccine is made by using an “inactivated” version of the virus that mimics an infection at a cellular level but does not make people sick.

So-called “whole inactivated” vaccines are tried-and-true, used for decades to make shots against polio, flu and other diseases — giving the body a sneak peek at the germ itself– but growing the virus is difficult and requires lab precautions.

Yang would not say with any assurance when CoronaVac could be available to the general public, but the company stands ready to manufacture 100 million doses. With China’s population currently standing at nearly 1.4 billion, it’s unclear how quickly other countries would have access to the vaccine if it proves successful.

“I don’t think we’ll keep the vaccines for China,” Yang told ABC News. “As we are talking to different — many countries, they’re also discussing about doing the trials and then how to secure the using of vaccines to help them.”

China company says its vaccine could be complete by ‘autumn’ originally appeared on abcnews.go.com