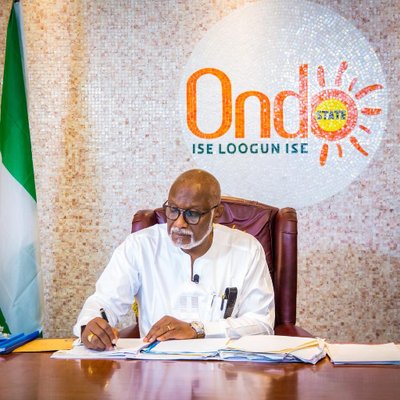 A chieftain of the All Progressives Congress(APC) in Ondo State, Mrs. Olamide Falana, has drummed support for the re-election bid of Gov. Rotimi Akeredolu in the party’s July 20 primaries.

Falana made this known on Sunday at a get together for Apoi ward 4 leaders, youths, and party members at Igbonini in Ese-Odo Local Government Area of the state.

She encouraged party leaders to focus on the goal which would ensure the success of Gov. Akeredolu whose mother was from Apoi.

The APC chieftain said the meeting was to boost the morale of the ward leaders in her community and to genuinely work assiduously to ensure Akeredolu’s victory both at the primary election of the party and the general election.

The ward chairman, Elder Duyile Manuwa, appreciated the convener whom he described as a respected leader in the ward and community for meeting the needs of the people in her own little way at all times.

Manuel promised to continue to rally support for the success of the party and solicited people’s support for Akeredolu.

Also, the Ward Secretary, Mr. Akinboboye Orimisan, said they were in full support of the governor’s re-election bid.

He promised to continue to mobilize the entire ward and community in support of the governor.

The meeting was well attended by political gladiators in APC in the community.