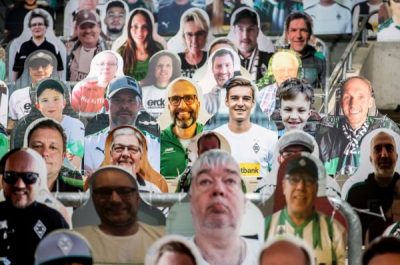 Fans of Bundesliga side Borussia Mönchengladbach have invented a concept that will make their beloved team feel their ‘presence’ in ’empty stadiums’ when the German top flight’s games restart behind closed doors later in May as planned.

According to a report in Time.com, the innovation is already getting popular among the Mönchengladbach supporters who are now paying €19 or $20.6 per head via an online portal to have their real images printed on cardboard which will occupy the Borussia Park Stadium seats in form of human dummies – to mimic fans presence even if in lifeless fashion, rather than ’empty stadium’.

Monchengladbach are currently fourth in the Bundesliga table and will first play away at Eintracht Frankfurt when the season returns, before hosting Bayer Leverkusen at the Burussia Park Stadium where their passionate home fans’ dummy images are expected to fill the stands and cheer them up.

Time.com reports that, “… supporters of Borussia Mönchengladbach, the German club that currently sits in fourth in the Bundesliga standings, have developed a novel oddball concept — one worth replicating around the world if coronavirus-era sporting events take place in empty stadiums and arenas in the coming weeks and months.”

Ingo Muller, a member of the Borussia Monchenglach supporters’ club who got the developers that designed the app of the novel dummy fans campaign that has already received more than 10,000 orders describes their brain waves satirically.

“Football fans in Germany are not the smartest people in the world. “We had to make it easy for them,[Monchenglabach],” he said.

The report also reveals that even the supporters of Mönchengladbach’s next opponents have placed orders for the cardboard images so that they can be present in the away team’s supporters’ section of the Borussia Park.

As the Monchenglach supporters’ innovation seems destines to gain worldwide popularity and acceptance, Muller is unsure if rivalry mindset could let Bayern Munich copy it.

“They would never dare to copy it. Bayern Munich is really pissed that we came up with it,” he said.