CAFCC: Enyimba Qualify For Q/Final After Edging Past San Pedro 5-2 In Abidjan

Enyimba booked a place in the last eight of the CAF Confederation Cup following a 5-2 win against San Pedro of Cote d’l voire in Abidjan on Sunday, reports Completesports.com.

Abdulrahman Bashir opened scoring for Enyimba In the second minute, while Victor Mbaoma added the second a minute later.

Sherif Jimoh pulled a goal back for the hosts in the sixth minute.

However, San Pedro fought back to pull a goal back just before half time through Rolan Zan Bi.

Enyimba then made the tie safe in the second half with goals from Mbaoma and Stanley Dimgba. 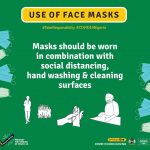