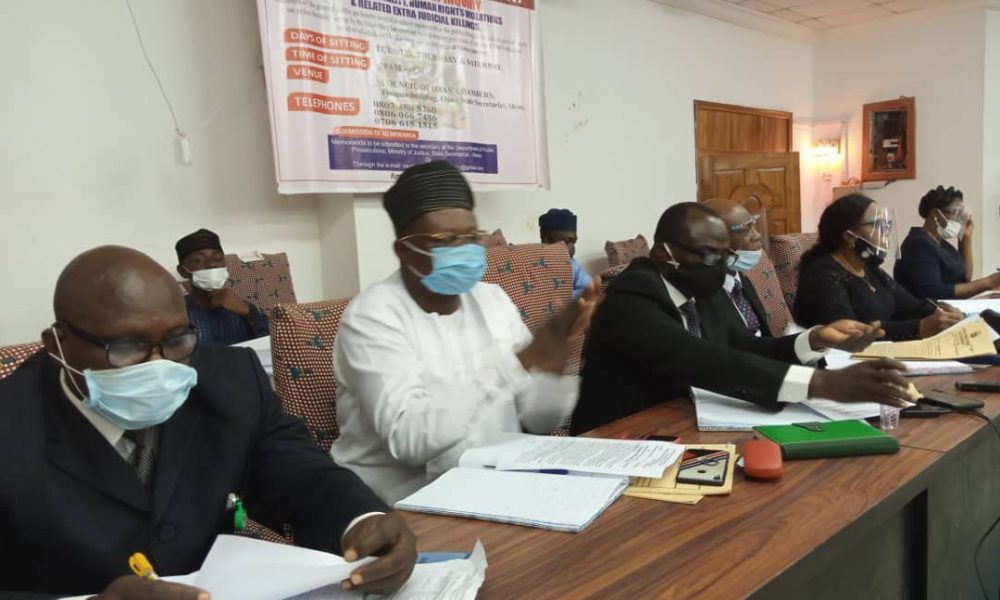 …says panel has disposed of 23 cases so far

The Chairman, Osun Judicial Panel of Inquiry on Police Brutality, Human Rights Violations and Related Extra Judicial Killings, Justice Akin Oladimeji (rtd.), on Friday disclosed that it reserved its recommendations as part of efforts to ensure justice and adequate compensations for all.

He said the panel reserved its recommendations in some of the cases already concluded in line with judicial procedure.

Justice Oladimeji who reaffirmed the commitment of the panel to ensure fairness and equity in all the petitions brought before it, said members of the panel had been working rigorously to ensure adequate compensations to those with good cases.

He said the panel has disposed of 23 cases out of 34 petitions before it.

This is even as a petitioner, Chief Jelili Adegoke Raheem, voluntarily withdrew his petition before the panel following his decision to settle the matter.

Raheem had approached the panel to seek justice on alleged assault meted out to him recently by a serving police officer in the State.

The petitioner had in his petition claimed that he was beaten to stupor by one Superintendent Dayo Ezekiel who allegedly punched him for no reason in October 2nd, 2020 while exiting a motor-park around Oke-Baale, Osogbo.

The Counsel for the petitioner, Barrister Michael Akinwande, who forwarded an application before the panel for the withdrawal of the case, said his client had settled the matter amicably with the accused person before the adjournment.

He said it was interesting to know that the erring officer had complied with the order of the superior police officer that had earlier charged him to formally apologise to his client before the case was brought before the panel.

According to him, the petitioner resolved to settle matter having agreed and shown contentment with the apology tendered by the respondent.

Ruling in the case, Justice Oladimeji struck out the petition in response to the request of the petitioner’s counsel since the matter has no public interest.

Addressing journalists shortly after the proceedings on Friday, Justice Oladimeji held that it was procedural for the panel to conclude all the cases, put its recommendations on paper and present same to government for adequate implementation and compensations.

While updating the public on the progress recorded since the inauguration of the panel, Oladimeji said the panel had disposed of 23 cases out of 34 cases before it.

“We struck out 12 cases out of 23 cases that we have concluded and 3 cases had reached final address stage, while 8 cases are pending for hearing and further hearing,” Oladimeji added.

The panel however adopted the final address written by the counsel for Mr. Ibrahim Olagoke who had petitioned the police for brutality.