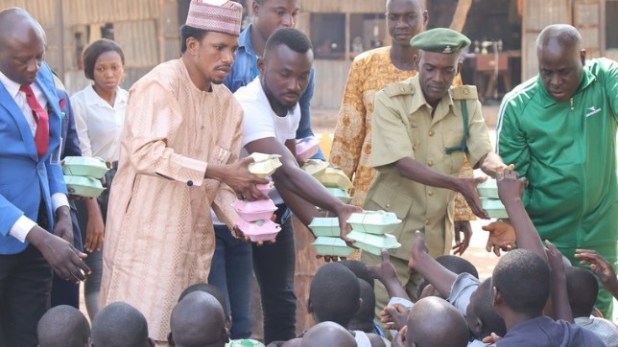 The Adamawa-North PDP senator, while sharing food with hundreds of inmates, condemned the fact that awaiting trial inmates had to wait for so long in prison for trial as a result of slow judicial process.

He said the inmates must not be neglected because they are still human beings who were “unfortunate of being where they are today”.

The senator said he has made plans to secure freedom for some inmates by paying the fines of those who haven’t been able to pay their fines.

He said, “We have hundreds and hundreds of inmates that are awaiting trial for years, I don’t think that is okay. Justice delayed is justice denied.

“And there are some others who have shown genuine repentance, they are already convicted.

“I have finished arrangement with the prison authorities so that they can compile their names for me and let us see what I can do.

“Those that I can pay their fines in line with the constitution of Nigeria so that they can be freed.”

Recall that Senator Abbo is currently having a court case because of a shocking assault he committed last year.

In a video which went viral in July 2019, the 41-year-old senator was seen assaulting a woman, Warmate Osimibibra in a intimacy gadget shop. This led to widespread condemnation. The incident occurred in May 2019 just a month before he was sworn in as a senator of the 9th Senate.

Many Nigerians called for the his suspendion by the Senate, and prosecution in court, after he refused calls to resign.

Though the lawmaker later issued a very public, remourseful apology to his victim and asked her, and Nigerians, for forgiveness days after the video was released, he was arraigned before a Chief Magistrates’ Court in Abuja, where he pleaded not guilty to two counts of criminal use of force and criminal assault. His case resumes 9th January.

Also, the Senate had set up an ad-hoc committee to investigate the incident and report back in two weeks.

But despite his issues with the court, Senator Abbo has been honoured with a “Beacon of Hope” award at the Adamawa Celebrities and Achievers Awards (ACAA), and an “ICON at Democracy” award by the Intercommunity Awareness for Change and Development Initiative (IACDI).