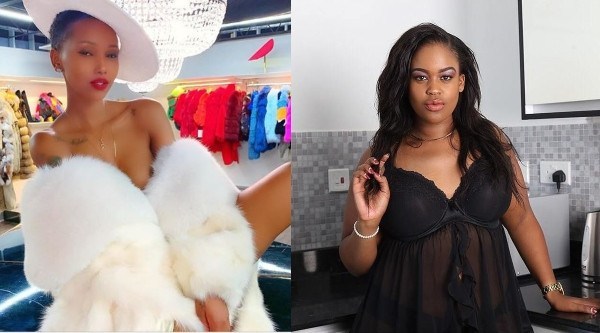 Huddah Monroe has fired back at radio presenter Kamene Goro, who during a table talk with media personalities Andrew Kibe and Xtian Dela alleged that she sells her body for money.

Kamene had described the socialite as a ‘girl with standard three English’, as she wondered how she stumbled upon a Range Rover and a luxury apartment. The radio presenter was heard saying in the viral shared online;

She has been selling P**sy. A girl with standard three English owns a Range Rover and an apartment in Kileleshwa, what else have you been selling other than P**sy.

Trying to get Andrew Kibe to comment on the topic, she added “What did you think she was, a lawyer?”

Hitting back at the radio presenter, Huddah Monroe stated that a queen doesn’t come off her a throne to address a peasant. According to her, only someone who is unsure of her position tries to prove herself, as what is understood doesn’t need to be explained.

“Only a bi*ch unsure of her position tries to prove herself…What is understood, doesn’t need to be explained. I am never oblivious to the reality of anything in life… Playing cool doesn’t mean playing a fool… It just means I am in control of the situation… Remember a queen never comes off her throne to address a