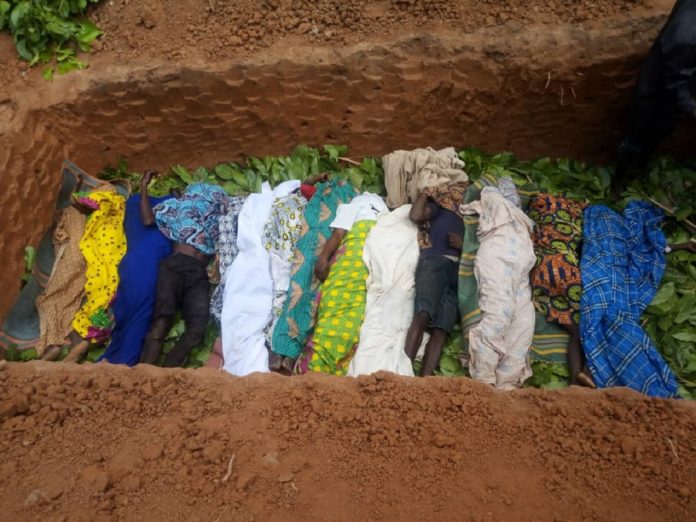 It is indeed very sad but not surprising that the terrorist/jihadist war on Adara nation has continued ferociously in year 2020. From January to 22/5/2020, the killings, maiming, burning, looting and kidnappings have continued unabated from village to village. Within the period, there have been 63 terrorist attack and kidnapping incidents, more than 107 people killed, about 49 persons injured, more than 66 men/women/girls abducted for ransom, more than 111houses burnt, another whole 32 villages destroyed and  20,000persons displaced (especially in the last two weeks). There have been daily attacks and destruction from Monday to Thursday in the remote settlements of Magunguna, Idazo, Ungwan Galadima, Ungwan Guza, Etissi, Ungwan Ma’aji, Ungwan Dantata, Ungwan Araha 1 & 2, Ungwan Goshi, Ungwan Shaban, Ungwan Jibo, Ungwan Maijama’a, Ungwan Sako, Ungwan Maidoki and Ungwan Masaba. These are all satellite settlements of Kallah, Libere and Gefe towns. As at this afternoon, 20 persons have been killed, several others are injured or missing. We simply lack the words to properly describe the atmosphere of anarchy and despair that is fast taking root in our communities with women, children, the sick and the elderly fleeing with the little belongings they can salvage. Our brutalized, dehumanized, terrified and traumatized community members are reeling in pains, ever wondering why this contrived anarchy is still being condoned by the powers that be.

We have since realized that the usual silence of government when most of these atrocities are being committed actually means consent. Consequently, several occupiers of high public offices have in unison spewed out rationalizations and justifications why mayhem is and must be visited on our timid people. We are therefore shocked that government has become brazen enough or descended so low as to justify terrorism, butchery and savagery of monumental proportions on such flimsy and illogical grounds. A Hausa adage says if a person speaking is a fool that does not make the listeners to also become fools. Sadly, it is characteristic of Nigerian rulers to delude themselves that responsible Nigerians can be perpetually fooled to believe them, or at least forced to endlessly endure their charades. It is obvious to all that their pronouncements are tantamount to open endorsement and deliberate empowerment of terrorists. Shockingly, government seems to be becoming an accomplice to the destruction of the law abiding citizens they are pretending to govern.

There are abundant facts to show that Fulani terrorists have for long been on the offensive in Adara land just as they have been nationwide. We have a detailed (though incomplete) chronicle of Fulani terrorist activities in Adara land.  Our records show that from 2016 to date, more than 209 terrorist incidents and attacks have occurred. In these incidents, almost 722 lives were lost,  198 persons were injured, 231 persons were abducted or detained and millions of Naira was paid as ransom.  There were also more than 817houses (in addition about 38 whole villages) destroyed, unquantified properties were destroyed and 30,000 persons displaced to date. These figures do not even include those from Adara communities in Niger state which are equally worrisome. We all know that the loss of lives and properties nationwide from Fulani terrorist activities (including even among peace loving and law abiding Fulani herdsmen) is by far more staggering than this. Given the above horrendous crimes against humanity, people of conscience would expect friends, relations and sympathizers of the evil doers to bury their heads in shame.  It is therefore unimaginable that these same persons are trying to outdo each other in justifying unthinkable evils visited on fellow men. If that is how the humanity of so called leaders has diminished, then we are truly doomed.

It is revealing that a Fulani authored press statement accused Adara people of attacking Fulani people only from July, 2017. If the alleged attack is really the offense, why then did Fulani terrorists carry out more than 27terrorist attacks, killed 41people, injured 25people, kidnapped several persons and displaced several villages in Adara land from 2016 to June, 2017 prior to any Adara attack? This was when Adara Chiefdom was even officially celebrated by the present Kaduna State government as one of the most peaceful Chiefdoms in Kaduna State. Furthermore, the press statement alleges a total of five Adara attacks on Fulani people in 5years of continuous and merciless Fulani brutality on peaceful, innocent, helpless and frustrated Adara people.   How can any sane person reasonably explain and or excuse the atrocities in 209 Fulani terrorist attacks on the basis of alleged five Adara attacks?

The above disturbing realities have left us with the following and many more questions begging for answers:

Is it logical, reasonable, realistic or moral to blame a community which has and is still suffering the above unimaginable atrocities for resisting its attackers?

When an already weak and marginalized people has been subjected to the above degree of ruin and desolation by an obviously advantaged adversary, is government now advocating total surrender and permanent domination as the only condition for “lasting peace”?

Is it justifiable for rulers to rationalize such monumental carnage and devastation on its innocent citizens and country at large in favour of obviously lawless brigands?

On the few occasions when terrorist victims were alleged to have carried out reprisals on Fulani herdsmen, did our rulers also justify the actions of the terror victims in the manner they are justifying terrorism?

Since the same Fulani terrorists are accused of the similar atrocities all over Nigeria (and even among their Hausa/Fulani kith and kin), is it because all Nigerians are attacking Fulani herdsmen that warrants nationwide reprisals from Fulani terrorists?

If some disconcerted and frustrated terrorist victims, out of helpless and hopeless desperation resort to self defense in the face of the generally observed government impotence, partiality and suspected collusion, should government not be directly blamed for that?

When government takes responsibility and even apologizes for terrorist attacks on Muslim communities, why does it perpetually blame the victims of attacks in Christian communities for similar terrorist acts?

Even if government thinks Adara people have done wrong, is it part of public policy to allow or encourage jungle(terrorist) justice as a remedy?

We believe honest answers to these questions will graphically expose the inconsistency of government in its dealings with victim communities like ours.

We are happy that Fulani official spokes persons and even terrorists are finally exposing their big and hidden appetite for Adara land. For instance almost all the terrorist attacks and displacements in the past two weeks are in Adara settlements neighboring Laduga grazing reserve. The intension is for Fulani herdsmen to annex and occupy the area. Around 25th April, 2020, Fulani terrorists ambushed Adara men after the Kujeni attack as a result of which  19 of them are still missing. A phone call later came from a Fulani terrorist saying that the missing men have been killed but they have taken a few of them into captivity. But instead of ransom, the terrorists are asking for land from Adara community to secure the release of the captives. Also in his press statement as the PRO of a Fulani Association, Ibrahim Bayero asserted that 78% of Adara land is already a government reserve (and by extension for Fulani people only since they are the only legitimate heirs of the Nigerian government). They have even crowned their claims by asserting that Fulani presence in Adara land precedes Adara occupation by centuries and that cattle husbandry (and not Adara farming) is the economic backbone of the area. If their fables had any aorta of truth, Fulani people will not now, in the year 21st century need to use violence or be relying on government might to acquire land.

It is an open secret that Muslim extremists in and out of government have declared war on Nigeria in general using Fulani/jihadist terrorists. It is well said that in every war, the first casualty is “truth” Those blaming victim communities like Adara people should know that it is hypocritical, mischievous or dubious to view the insecurity in our community in isolation. The bottom line is that politics, religion, ethnicity and violence are being viciously deployed depending on the situation.  And the ultimate goal is to achieve economic supremacy through the complete take over and control of any available local and national economic resources and opportunities. Strangely, citizens are being coaxed to fully cooperate, tolerate or bear with this eccentric grand scheme.  The unforgivable sacrilege committed by communities like the Adara is having the audacity to expose and oppose this evil plan. And for that offense, we are being taught a bitter lesson to serve as a deterrent to other (actual or potential) dissident communities.

In conclusion, what appears as ethnic, religious and security challenges are actually, in the final analysis, caused by lack of political will to provide good governance. For political expedience, government routinely relies solely on the opinions of people in politics. Most of them are people whose stomachs are their gods and being in government is the paradise they can do or say anything under the sun to cling unto. Therefore, our prayer has and continues to be that government and all other interest groups should ensure social justice to all. Adara nation will do the same whenever the opportunity presents itself. This call is being reiterated because there is clearly a grand design to contrive an environment for the implementation of policies and projects for the appeasement of some interest groups and the emasculation of others.  This is undermining genuine peace to the detriment of all, especially disadvantaged communities like ours.