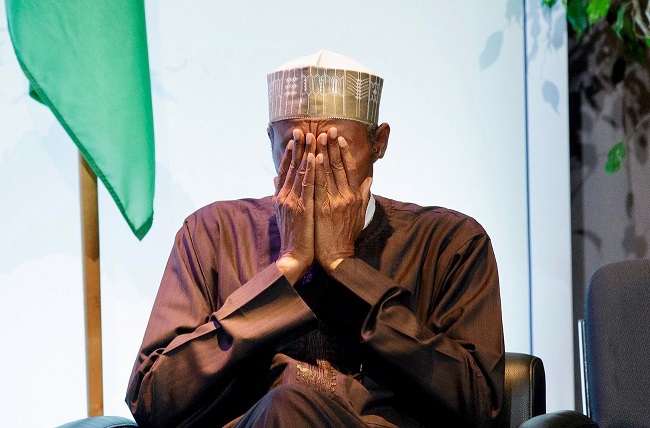 2020: The Most Difficult Year To Be President Buhari

A few days ago, Twitter was agog following a hashtag, #AsoRockIsEmpty which trended at No. 1 for the whole day. The hashtag which was initiated by Nnamdi Kanu, leader of the proscribed Indigenous Peoples of Biafra (IPOB) insisting that President Muhammadu Buhari and his Vice, Yemi Osinbajo were missing in the Presidential seat of power, Aso Rock. Kanu also claimed that Buhari’s top aides Femi Adesina and Garba Shehu were nowhere to be found and allegedly kicked out of Aso Rock by First Lady, Aisha Buhari.

The hashtag was taken advantage of by IPOB supporters, Biafra sympathizers and anti-Buharists to spring a barrage of insults and attacks on President Buhari, his party the All Progressives Congress (APC) and his associates. Pro-Buharists on Twitter were not left out of the attack as well.

If you say it was a very eventful day on social media, you would not be far from the truth.

When President Buhari and the 36 State governors won elections last year and assumed office, they had hoped it was going to be no different from the usual. Unknown to them, the following, 2020 wasn’t going to be business as usual.

For President Buhari, it has been one hell of a rollercoaster and perhaps his most difficult year since resuming office as a democratically elected president.

Since the outbreak of the virus, President Buhari has been dragged in the last two years more than he has ever been. He has been called out for several reasons, including for not closing the borders earlier than he did, dragged for not addressing the nation earlier, and when he finally did, he was condemned for badly pronouncing the code name of the virus. The President was later dragged again for his speech with traducers and critics like Nnamdi Kanu, Femi Fani-Kayode, a former Minister of Aviation under President Olusegun Obasanjo, Reno Omokri, a former aide to President Goodluck Jonathan who now tags himself #BuhariTormentor, Aisha Yesufu, Co-convener of the Bring Back Our Girls (BBOG) movement, Farooq Kperogi, public speaker and newspaper columnist, and the opposition Peoples Democratic Party trashing him at every given opportunity.

Coupled with dealing with the attacks, the President still has to wrap his head around the growing number of problems bedevilling the country in just this first few months of the year. Yes, the previous years had their challenges, but may not have given the President as much headache and sleepless nights as what he is getting right now.

The effect of the coronavirus pandemic has been a major concern not only for Buhari, but for every other world leader. This pandemic was never envisaged and so there was no planning for it. Like the saying, “uneasy lies the head that wears the crown,” Buhari must have had a difficult time trying to figure out the best possible measures to adopt in containing the virus. There were the options of to shut down or not to shut down borders, when to actually shut down the borders and airports, and of course, the dilemma of enforcing a that was going to halt all economic activity.

Initiating a lockdown was the easy part, the hard part was getting people to obey the sit-at-home order and being able to make adequate provision to feed the masses and provide other forms of palliatives to cushion the effect of the lockdown on the citizens who otherwise could have easily fended for themselves.

Weeks after, no issue was as highly debatable as the issue of relaxing or easing the lockdown. Some people were okay with the lifting of the lockdown, but many others didn’t think it was such a good idea given the daily increase in the number of confirmed cases as announced by the Nigeria Centre for Disease Control (NCDC).

While the number of infected persons was increasing, Buhari needed to figure out how to adequately make available test kits, ventilators, and other equipment, being that Nigeria didn’t manufacture any of these facilities. Procuring medical supplies and equipment has been difficult as a result of the slowdown in manufacturing of these supplies during the pandemic coupled with a high global demand. Lucky enough, Nigeria was able to get some from foreign private individuals, governments and organisations.

Buhari has had to contend with the spontaneous and impromptu setting up of isolation centres to host persons who have been infected by the virus and labs to conduct tests on samples. The more the centres and labs, the better Nigeria was doing to contain the pandemic.

Current economic realities as a result of the impact of the Coronavirus pandemic on the global economy has forced Buhari’s government to amend the 2020 budget. The pandemic was unforeseen at the time the budget was drafted, debated and passed, and so, spending related to it had not been previously captured.

More so, with global oil prices plunging as a result of the pandemic, the projection that Nigeria would generate crude oil production of 2.18 million barrels per day, at an expected oil price of $57 per barrel had to be revised.

The government has had to approve a revised budget of N10.523 trillion from the earlier N10.594 trillion, representing a reduction of only N71billion. In addition, Buhari’s N850 billion loan request from the Senate to finance projects and programmes in the 2020 budget has raised more concerns as the country sinks further into a rising debt profile crisis

Still trying to get a grip of all the events of the past few months, Buhari loses his most trusted aide, Abba Kyari to the Coronavirus. I imagine how shocked the President must have been on hearing the news of the demise of Kyari who he has come to emotionally and intellectually dependent on. He would have wondered, “who will now protect me from all these vultures?”. “Who will I confide in when this job gets depressing? No wonder it took the President this much time to find a replacement for Abba Kyari.

Never have the words ‘incompetent’, ‘incapacitated’, ‘figurehead’, ‘docile’ and ‘breathing mannequin’ been used to describe Buhari as much as they have been used in the last few months. I’m sure, while Buhari may pretend not to care how Nigerians perceive him, he must be anticipating the end of his government in 2023 so he can resign back to his farm in Daura, away from the frequent insults from some Nigerians.