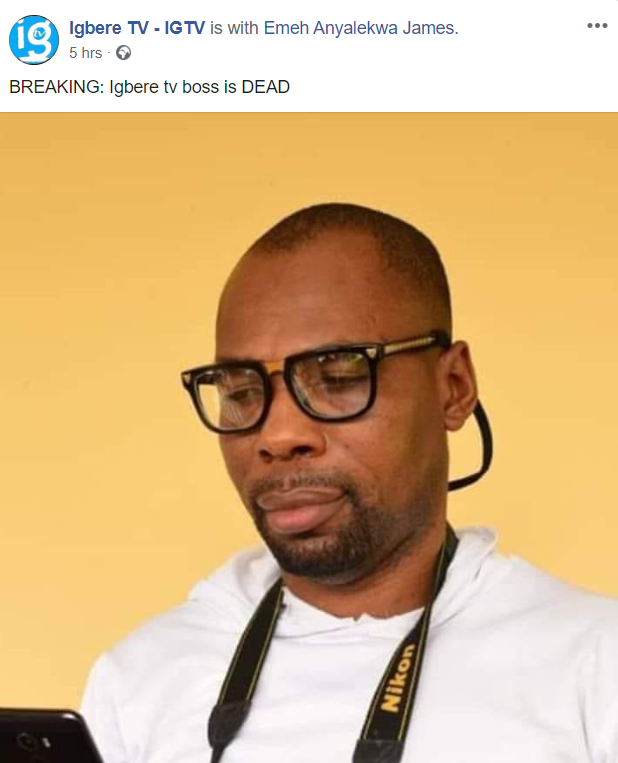 Few days ago, Facebook was agog with the news that the founder of Igbere TV Emeh Anyalekwa James was abducted and his body was dumped by the roadside.

In an interesting update, Igbere TV has now announced they were hacked. Read the official press release below;

Our attention has been drawn to several misleading and malicious reports published widely on our website and Facebook page, with the impression that such stories emanated from our highly dedicated and hardworking editors.

We wish to reiterate and state categorically that those reports did not in any way emanate from us, neither are we in any way connected to the false narratives or their sponsors on whose apparent instructions those stories have originated. We will never do anything that will harm our esteemed readers and followers.

It is on record that on Friday March 13, we raised the alarm that our platforms (website, Facebook page) were attacked, compromised and accessed by “hackers”. The first thing they did was to delete all our admin from the platforms to stall any counter-post from us, disclaimer or deletion of their false stories while they perpetrated their evil acts.

For the avoidance of doubt, our indefatigable and uncompromising Executive Director Emeh James Anyalekwa was at about 7pm on Thursday, March 12 abducted around Kubwa area of Abuja and taken to an unknown destination until his release the next day, Friday March 13.

Like we earlier called the attention of the world to the sad development, while our boss was still in their custody, they used his phone to gain access to our Facebook page and website and planted the fake and misleading reports in question.

We couldn’t have published a story that our boss was dead after declaring that he had been abducted. To what end? We are well aware that the story was widely circulated, republished and broadcast in several online medium at will.

We do not know the rationale behind such posts from the “hackers” or what they aimed to achieve, but all we know is that we hold the affected persons in the highest regard and could not have published any malicious statement that could affect their image or hurt their reputation.

To this end, we hereby apologize to our boss, Emeh James Anyalekwa; Senator T. A. Orji and son, Rt. Hon. Chinedum Orji; and Mazi Nnamdi Kanu, leader of the Indigenous People of Biafra (IPOB) and his followers. All the misleading stories have since been retracted from our platforms.

Igbere TV has a clean and track record of running only factual news, established and genuine stories on its platforms. Over the years, we have become a reference point and final-stop medium for genuine news readers all over the world. We couldn’t have compromised such integrity and global reputation for anything.

We remain committed, resolute and dedicated to Igbere TV’s core objective of providing an independent platform for unbiased news without fear or favour, irrespective of the continuous clampdown on journalists and media houses which negates the principle of press freedom.

We will continue to stand for truth, justice and equity, irrespective of how uncomfortable it might seem to our detractors and haters at the moment, because a better and well refined digital media is all we desire for the people.