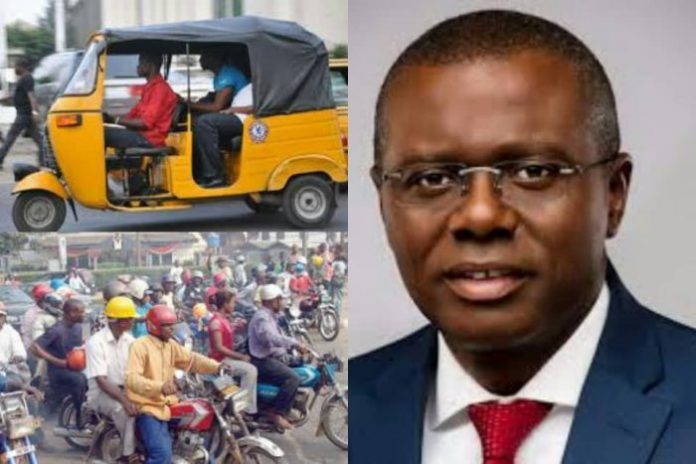 Sanwo-Olu is getting it wrong on Okada/Keke ban

Governor Babajide Sanwo-Olu of Lagos State is beginning to get the ban on commercial motorcycles (Okada) and tricycles (Keke) from major roads in the state, as a means of transportation, wrong. This is not unconnected with the deployment of VIOs and Traffic Police to the roads across the state. The action of the Lagos State government which took effect from February 1, 2020, obviously has its merit in combating crime, preventing environmental crisis, population, among others. The level of compliance by the okada and keke operators has been encouraging. Also, the hardship the ban has caused Lagos residents in going and returning from work, businesses, schools and other engagements has been monumental.

The enforcement by security operatives has also been peaceful.

Governor Sanwo-Olu made rational intervention in the release 65 new Blue buses to augment the existing 820 buses in operation to mitigate the hardship commuters encounter during this period.  However, the buses appeared allocated for urban services only, leaving out the urban periphery routes to link the heart of the city. The governor on Tuesday made further rational decision in proposing the release of more 500 buses into the transport system next week and expanding the operational routes.

The governor’s point of getting the enforcement process wrong is in the deployment of VIOs and Traffic Police to the roads. Unfortunately, instead of these state officials looking out for law offenders, they were looking out for victims to arrest and take their vehicles to the office for fine. Both the VIO and Traffic Police were everywhere Tuesday morning.  Their intimidation of drivers scared several others from bringing out their buses for work. The consequence was that there was further shortage of vehicles on the roads to convey people to their places of work and businesses. Several people were on queue from the morning hours into the afternoon at several bus stops across the state, many others had to trek long distances.

The deployment of VIOs and Traffic Police to the roads worsened the predicament of commuters in Lagos at a time they were still adjusting to the hardship the ban on okada and keke had caused.

The leader of a team of VIO, J.L. Adewale, at Ifako/Ijaye LCDA, ordered a commercial bus going to Ogba from Ishaga on Tuesday morning to stop along College Road, close to Yaya Abatan. The driver packed, presented his documents as requested. The VIO officer, Adewale, checked all the documents and they were up to date, including the driver’s licence. He appeared to be giving approval with the nodding of his head as he flipped through the documents one after the other.

In desperation to catch a victim in the operation, Adewale told the driver that he is arresting him not because of his particulars, which he certified are current, but because of the crack on the front screen of the bus and the road worthiness permit which expired on January 15, 2020, and was not renewed as at February 4, just 19 days away.

As absurd as the reasons for the arrest of the driver sounded, VIO Adewale told the police officer in the bus who attempted to intervene, identifying his presence in the bus, that he had specific time for the operation and was not prepared to listen to anyone interrupting his arrest of the driver. He reiterated that he was time bound, thereafter, he departs that location. A junior VIO officer was ordered to drive the bus to the VIO office towards Ojodu Berger. The driver was forced to surrender the key to the officer and take the passenger seat. Passengers were compelled to alight at a point convenient for the VIO officer on his way to the office. The passengers were not taken to the final bus stop while VIO Adewale said the driver can refund the passengers money.

The irony is that there are thousands of drivers who operate without required papers, not even driver’s license but the VIO officials were not looking for the law breakers but victims.

Meanwhile, Governor Sanwo-Olu may have to be conscious that the deployment of these officers at this point will only worsen the already bad transportation situation in the state. The governor may have to recall them till a much appropriate time, otherwise, the motive for the action could be misconstrued for drive for revenue generation.  The state government should not turn the noble policy to hunt for scapegoats.

Meanwhile, it has become imperative that some of the Blue buses need to be drafted to the urban periphery to facilitate moving people into the city or destinations of their work places from the outskirts.