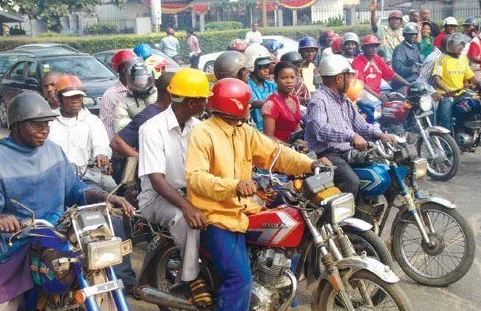 SANITY reigned across major roads of Lagos metropolis on Saturday, on day one of the restriction imposed by the state government on the operations of commercial motorcycles and tricycles. Okada and Keke riders kept off the major highways and bridges in compliance with the government directive

The Iyana Ipaja/Ikeja/Oshodi axis where okada riders used to hold sway prior to the restriction was visibly bereft of them yesterday.

Many commuters who would have required their services were seen walking to their destinations.

The General Manager of LASTMA, Mr. Olajide Oduyoye, said that there would not be fight or argument with any operator who willingly complied with the law.

For instance, in the Oshodi area of the state where there are designated parks for all sorts of commercial motorcycles, including Opay, Gokada, Max Okada and others, no motorcycle was seen in sight at the time of this report except for a dispatch rider belonging to 12 Baskets.

On the Apapa-Oshodi expressway, okada riders were seen at every five minutes’ drive without any tricycle in sight. Iyana Isolo bus stop was free of okada riders that used to impede people from crossing the road to the other side while the other side was also free of okada and keke marwa. From Iyana Isolo towards Daleko, there were no okada or keke; so passengers had to walk from Iyana Isolo to Daleko to board vehicles heading to their different directions

From Oshodi towards Ketu, Mile 12 and Ikorodu, there were no okada or marwa in sight also. Iyana Ipaja to Oshodi was also free of okada riders, as well as Obalende to Oshodi. But at Mosafejo across Oshodi, some okada riders were seen on their bikes waiting for passengers and moving around.

Agbara towards Iyana-Iba to Mile 2 was not totally free as okada riders started work very early before officials of the police force came to chase them away. Many of them had several degrees of injuries as they were seen falling and getting up as they ran from the policemen.

At Agbara, they hid on the Ogun State side of the road until the men of the police force were no longer in sight, then they came out again to begin work and go back into hiding when they sighted police personnel.

However, some commuters lamented the hardship over the kick-off of the enforcement of ban in the state.

A commuter, Clement Osondu, who spoke to our correspondent at Ojodu area, said that this law was to punish the poor masses, adding that he trekked for over 30 minutes.

Osundu warned that if the law was not reviewed, more hardship would be on the people, adding that that there would also be more joblessness in the society.

Mrs. Lucy Ekpeyong, from Ikotun area of the state, said that there has been an exodus by the commuters, stressing that everyone was echoing that Lagos State must have to re-think on this policy, as it is only getting on the poor masses that could not afford cars.

The state government last Monday announced the ban of motorcycles and tricycles in 15 local governments and local council development areas as well as some major highways and bridges in Lagos State.

Lagos State Task Force officers parked their vehicles at strategic locations within the metropolis such as Iyana-Ipaja, Ile Zik, Ikeja and Oshodi Bus stops yesterday to monitor and ensure compliance.

Speaking on the day one of the ban yesterday, the LASTMA General Manager said compliance with the law was pretty good.

“The compliance is pretty good for the first day. We hope to see that a lot will comply more and more. Operators must keep doing what the law says,” he said.

The LASTMA boss said the enforcement was to control the unrestrained behaviour and recklessness of the operators in the state which contributed to the traffic bottlenecks in the state.

The traffic manager explained that the operations of tricycle and motorcycle riders had also been creating traffic bottlenecks and chaos in the state and accused them of regularly riding against traffic.

“The difficulty we always have is this keke and okada riding against traffic and causing a lot of traffic chaos.

“When a minor accident happens with keke scratching a vehicle and there is an argument, it disrupts the traffic flow.

“That made our jobs a lot more difficult. So, now that they are going to be off the major highways, our work will be much easier.

“The motorists creating traffic chaos will not have keke or okada to blame again.

“LASTMA officers are up to the task. We are going to do our job as diligently as we are supposed to,” Oduyoye said.

According to him, “we will operate where we are supposed to operate and work to make sure that traffic is flowing as much as possible.

“We expect that since so many junctions and corners will be     free of keke and okada parks and loitering; when enforcement comes up, there will be better traffic flow in Lagos State from today,” Oduyoye said.

He said that if the operators stay within the ambit of the law and operat within the law, there won’t be problem as a lot of people still rely on them.

“We can see their apprehension and likely pain; but I blame the operators for misbehaving in such a way that their operations become security and safety issues.

“No responsible government will sit back and allow this to grow and to grow out of hand; which is exactly what is happening,” he enthused.