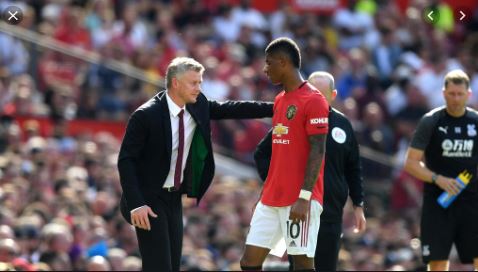 Paul Pogba has set at least two weeks for his return to training.

Meanwhile, Ole Gunnar Solskjaer has appealed to Paul Pogba to ensure that he is back in time for next month’s derby against Manchester City.

Pogba has missed the last seven games due to an ankle problem he sustained in September.

His foot is currently in plaster after a recent operation, stalling his rehabilitation process.

Manchester United travel to the Etihad Stadium on December 7 to face their “noisy neigbours”.

National Daily gathered from the report by the Daily Star that Solskjaer who publicly written off Pogba’s return until December has however pleaded with Pogba to focus all of his efforts on returning from injury for the match.

“I don’t think we’ll see him before December. He’ll be out for a while,” he said.

“He needs time to fully recover so I don’t think he will be back before maybe Sheffield United after the international break but probably December before you can see him.

“I’m not a doctor but there is an injury there that needs healing. There’s no use talking about who’s not going to be here for a long time because he’s not going to come on the pitch and help us.”

Despite the team’s problems on the pitch, Pogba is determined not to rush his return from injury.

“I will still be under plaster for ten days,” he said. “After, I still have two weeks of rehabilitation.

“It’s not easy to see my teammates go to training or on the field, but I have to take the time to come back.”

<!-- A nurse inside a field isolation ward for COVID-19 cases in Machakos Kenya. The country among nations recording…

Why Obaseki Was Not Removed As Governor – Oba of Benin

Oba of Benin The Oba of Benin, Ewuare II, on Saturday, said his prayers sustained governor Godwin Obaseki for…

Fireboy Nigerian singer, Ademola Adefolahan, who is better known as Fireboy, has narrated how he was once treated as…

Masego Enlists Santi For The Remix Of His 2018 Track, ‘Queen Tings’

Oh No! Footballer, Junior Sambia Placed Into A Coma After Testing Positive For Coronavirus