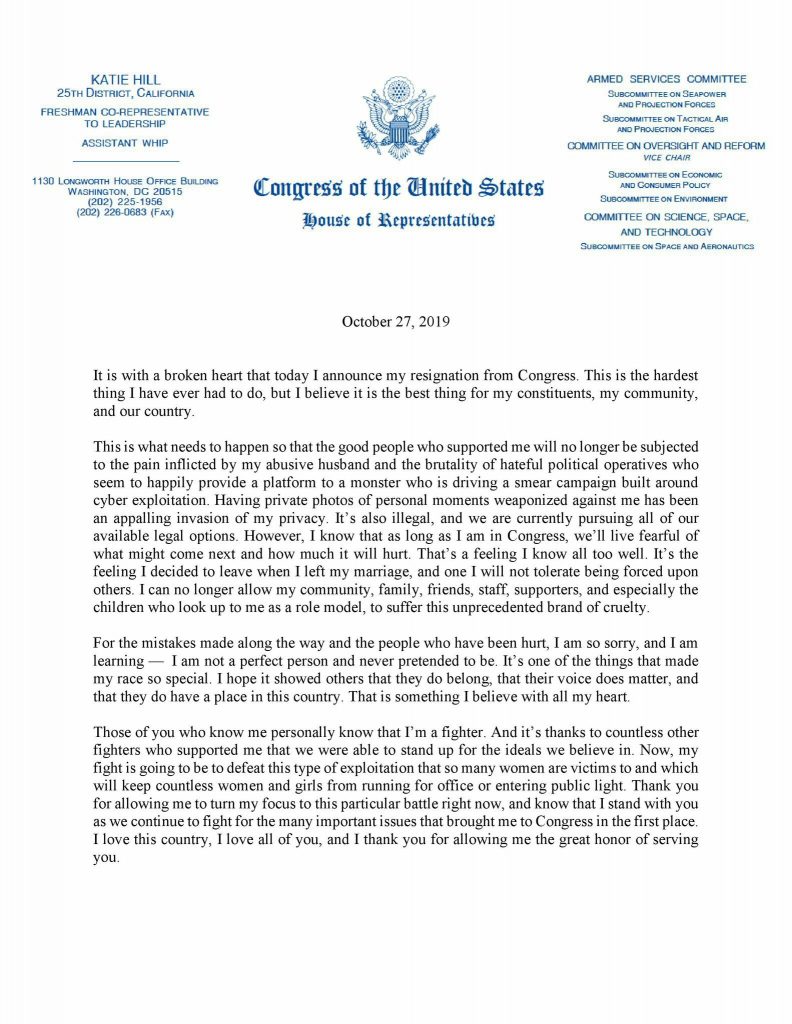 Freshman Rep. Katie Hill is resigning from Congress after facing allegations of inappropriate sexual relationships with staffers in her office and on her congressional campaign, according to two Democratic sources. 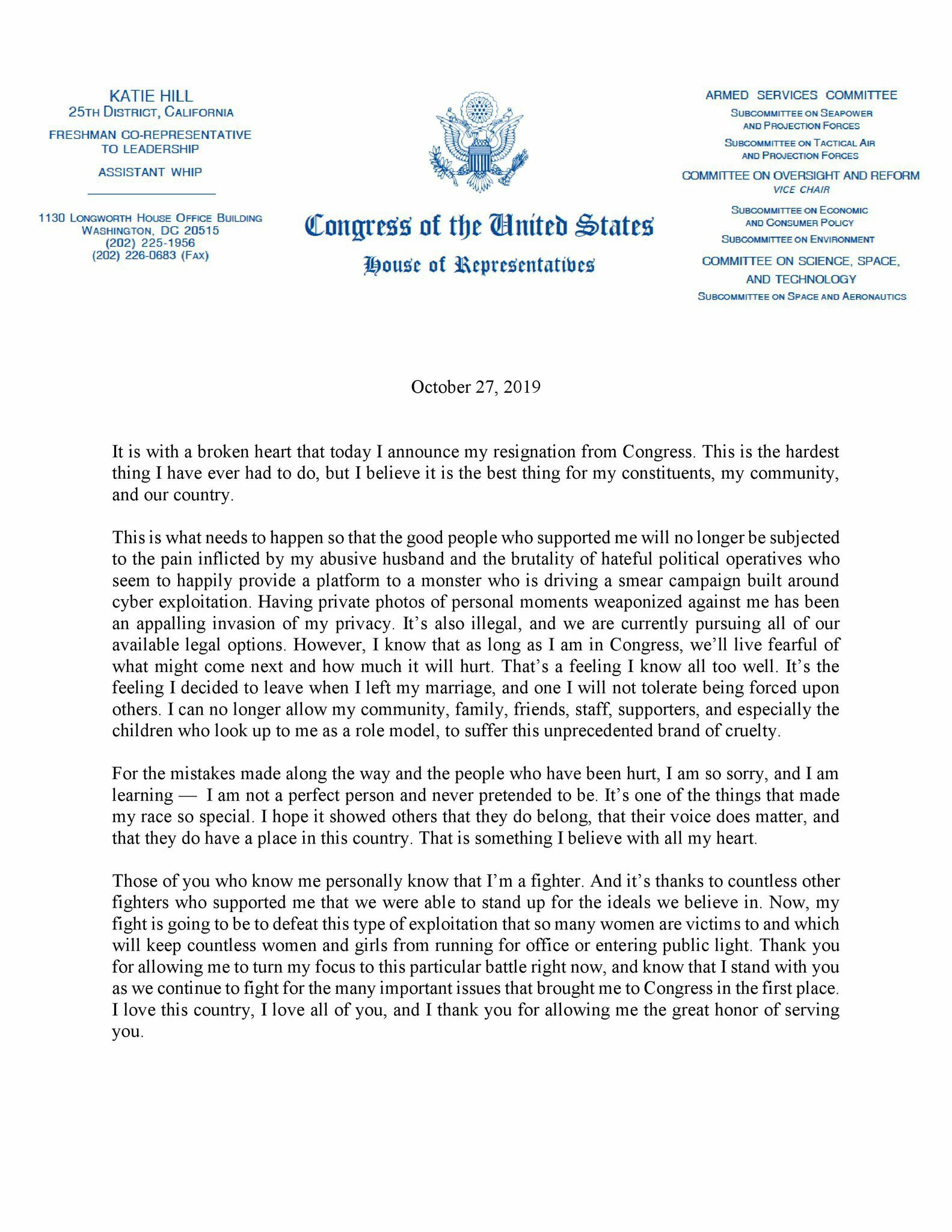 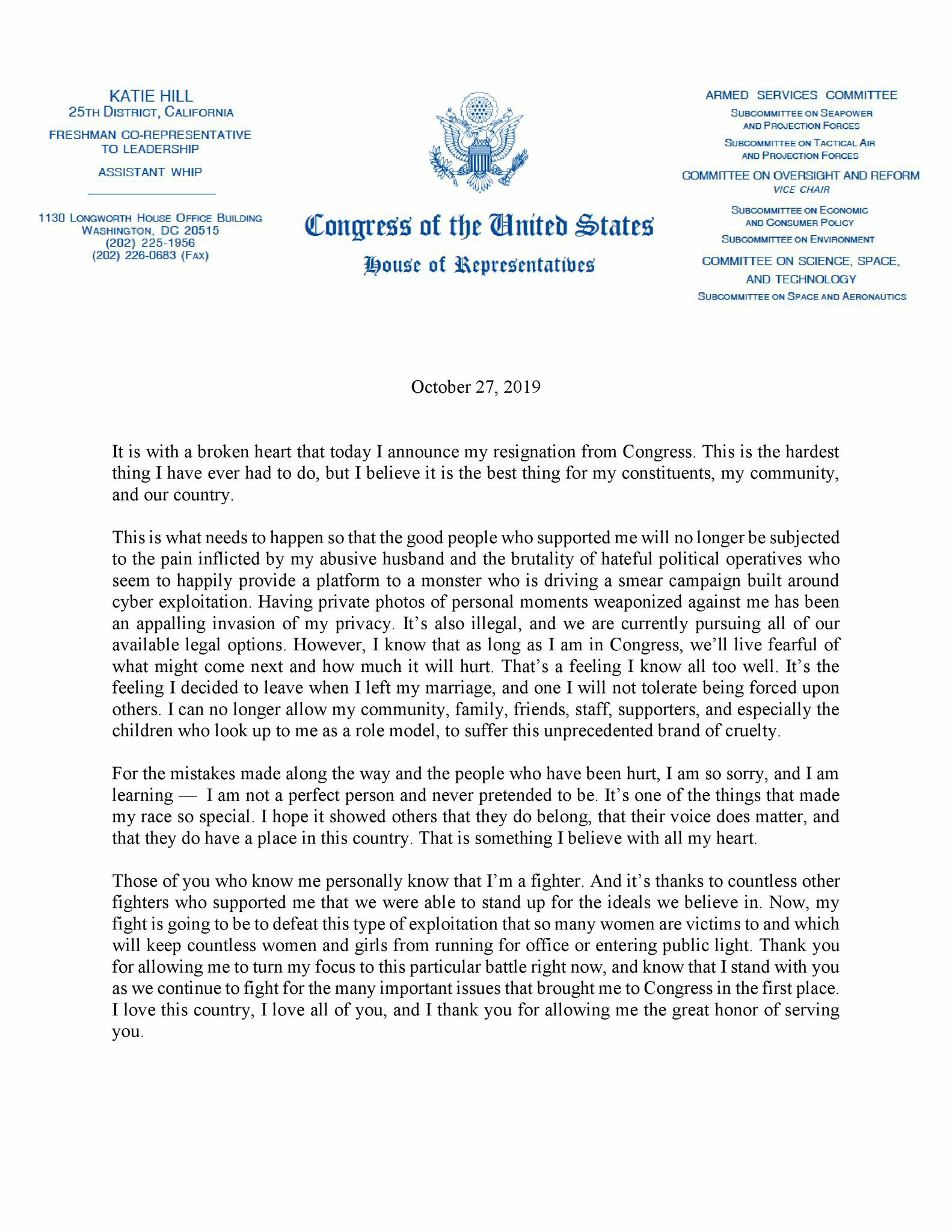 “It is with a broken heart that today I announce my resignation from Congress. This is the hardest thing I have ever had to do, but I believe it is the best thing for my constituents, my community and our country,”

“This is what needs to happen so that the good people who supported me will no longer be subjected to the pain inflicted by my abusive husband and the brutality of hateful political operatives who seem to happily provide a platform to a monster who is driving a smear campaign built around cyber exploitation,” she added.

Hill did not specify a resignation date in her letter but multiple people with knowledge of her plans said she could step aside as soon as Nov. 1.

Hill was under investigation by the House Ethics Committee for allegations of an improper sexual relationship with a male congressional staffer, a claim she denied. Hill admitted to and apologized for an “inappropriate” relationship with a female campaign staffer earlier this week.

In a statement earlier this week, Hill blamed the ongoing scandal – which included several nude photos of the lawmaker published in conservative online news outlets – on an “abusive husband” whom she is in the middle of divorcing.

Attorneys for Hill even issued a cease and desist letter earlier this week to a British tabloid after the outlet published several intimate photos of Hill, including one that allegedly depicted her holding a bong while naked.

Sources with knowledge of Hill’s resignation said her decision to step down was prompted, in part, by hopes of stemming the flow of embarrassing and defamatory reports that have popped up in multiple outlets, starting with conservative site RedState.org last week.

The outlet accused Hill of having a sexual relationship with her legislative director, Graham Kelly, which the website claimed was uncovered by Hill’s husband, Kenny Heslep. Hill vehemently denied the relationship with Kelly, who also worked on her congressional campaign.

Hill said the publication of personal and intimate photos was an “appalling invasion of my privacy.”

“It is also illegal, and we are currently pursuing all of our available legal options,” she added in her resignation letter. “However, I know that as long as I am in Congress, we’ll live fearful of what might come next and how much it will hurt.”

“I know that even a consensual relationship with a subordinate is inappropriate, but I still allowed it to happen despite my better judgment,” Hill wrote in a letter to her constituents.

“I am saddened that the deeply personal matter of my divorce has been brought into public view, even the false allegations of a relationship with my congressional staffer, which I have publicly denied, and I am fully and proactively cooperating with the Ethics Committee,” she added.

Hill, 32, was a rising start in the 2018 freshman class, with position in both House Democratic leadership and as vice chair of the House Oversight Committee.

Hill was one of the “majority makers,” flipping a GOP-held seat that contributed to House Democrats’ romp back to the majority last year.

Hill trounced Republican Rep. Steve Knight (R-Calif.) by 9 points in a district in the northern exurbs of Los Angeles that was once reliably Republican. The seat, which Hillary Clinton won it by 7 points in 2016, has trended toward Democrats but is still considered competitive.