Father Of Five Kills Himself In Ekiti

An old man, Mr Daniel Sakpe, has hanged himself in the Omobayi area of Itapaji in Ikole Local Government Area of Ekiti State, this throwing the community into confusion.

It was gathered that Sakpe, a father of five, left his wife around midnight on Monday, with an excuse that he wanted to visit the toilet.
After being away for long his wife got worried, having expected him to rejoin her. She then called out severally but didn’t get an answer. That led her to raise the alarm and woke up one of her children, identified as Rebecca Sakpe, who went looking for her father.

Deborah, it was further gathered, found her father’s body hanging on a rope inside the house after flashing her touch light on the ceiling of the building.

Neighbours who expressed shock at the tragic development said the deceased was not moody; he did not give any indication that he would commit suicide either. “He was part of those who conducted the church services in high spirit on Sunday,” they said.

Meanwhile, a police source said that officials from the Ikole police station had recovered his body and begun investigation into the development. Governor of the State of Osun, Mr Gboyega Oyetola on Thursday paid a courtesy visit … 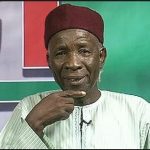