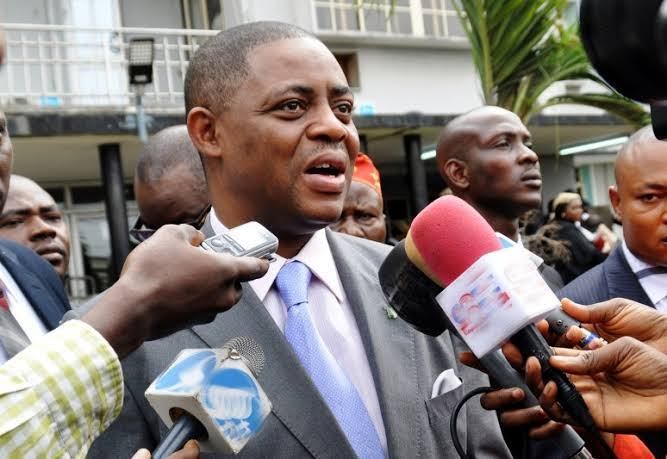 A civil rights movement, Coalition of Civil Society Groups in Nigeria, yesterday, raised the alarm over fresh plots by the Presidency to arrest a former Minister of Aviation, Femi Fani-Kayode and frame him with treason charges.

While alleging that the government was planning to give him the “Dasuki treatment”, they described as pathetic President Muhammadu Buhari’s silence towards the atrocities of Fulani herdsmen in Nigeria.

They said if the government goes ahead to arrest him, the coalition would “mobilise more than our 36,000 members nationwide for a mother of all protests across the country.”

While calling on the Federal Government to shelve the plan to arrest Fani-Kayode, they also called on the European Union, United Kingdom, United States of America and others to “look into the ongoing issues in Nigeria, as the members of the main opposition party are almost becoming helpless victims in the hands of the present administration.”

The coalition expressed their views during a press conference addressed by We Care Initiative, Arise Initiative and Project Nigeria.

The national chairman of The coalition, Emmanuel Olorunmagba, who spoke on behalf of the coalition said that despite the widespread insecurity in Nigeria, Buhari left the herdsmen “rampaging different communities, killing many innocent citizens” but was using security forces to go after the most vocal voice in the opposition.

Olorunmagba said: “We say no to dictatorship, no to all attempts to suppress the voice of the opposition; no to violation of fundamental human rights of Nigerians and no to any planned arrest of Chief Femi Fani-Kayode, who is the most prominent vocal voice that speaks for the oppressed.

“The information reaching us of the plan to arrest Chief Femi Fani-Kayode who is always speaking for the masses against the wickedness and evil of this administration is not good at all.

“Thus, the Presidency or any branch of the security forces that may be planning to arrest Chief Fani-Kayode should, in the interest of democracy, stop and the energy that will be used in chasing such strong voices in the opposition can be channeled towards arresting the herdsmen who are killing innocent citizens and terrorising the country.

“While a court order is still subsisting, another information recently broke out again as a retired intelligence officer in a video who claimed to be talking based on privileged information revealed by some in the nation’s security forces and intelligence agencies, asserted that there is another plot to indiscriminately arrest Chief Femi Fani-Kayode for treason.

“Further secret investigation we carried out point towards plan to arrest him and detain him indefinitely like in the case of Sambo Dasuki (former National Security Adviser. Therefore, we are putting Nigerians on notice and indeed the entire world that what we have achieved in democracy is being wiped off and we will legally resist such.”