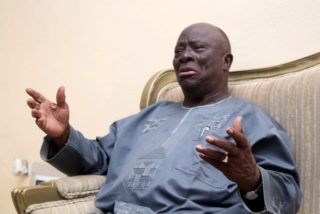 ‘MY PARTICIPATION,’ the autobiography of Bisi Akande, a former governor of Osun State and pioneer chairman of the All Progressives Congress (APC), has continued to generate controversy with Afenifere leader Ayo Adebanjo alleging that the book is full of lies.

Major highlights of the book include Akande’s account of how Adebanjo pestered a former governor of Lagos State Bola Tinubu to build a house for him (Adebanjo) in the Lekki area of Lagos.

The book also claimed that President Muhammadu Buhari promised to make Tinubu his running mate in the 2015 presidential election, which brought him to power as Nigeria’s president.

Buhari reneged on the promise, according to Akande, after he was pressurised by some northern governors to drop Tinubu in order to avert a Muslim-Muslim ticket.

Akande claimed it was Tinubu who suggested Yemi Osinbajo to Buhari as his running mate.

Osinbajo was a commissioner under Tinubu’s administration as governor of Lagos State.

The autobiography also narrated how a former Vice President Atiku Abubakar rejected Tinubu as his running mate after he (Atiku) emerged the presidential candidate of the Action Congress (AC) in 2007, despite the fact that the former Lagos governor (Tinubu) was the one funding the party.

Akande wrote, “Anytime we said we needed money, Atiku would say ‘Bola (Tinubu) please help us’. Bola was the only one spending the money among us. The rest of us were poor. Tinubu also put all his energy and resources into the formation of the AC.”

Contrary to the widely held belief that the APC promised to restructure Nigeria ahead of the 2015 general election, Akande, in the book, said the party did not have restructuring in its manifesto for the polls.

Rather, he said the APC promised to support devolution of powers from the centre to the states.

Two elder statesmen – Afenifere leader Adebanjo and a former presidential aspirant Olu Falea – were singled out for criticism bordering on abuse in the book, with Akande insinuating that they refused to support younger persons to represent the South-West at the 2014 National Conference because of their desire to pocket generous allowances given to conference delegates.

Adebanjo and Falae were among leaders of the South-West delegation at the confab.

But Adebanjo has come out to dismiss contents of Akande’s book.

Speaking on Arise Television on December 14, Adebanjo said Akande was a pathological liar.

Tinubu is expected to seek the presidential ticket of the APC in 2023.

Reacting to the book, Adebanjo said, “He (Akande) is already known to me as a pathological liar. His colleague, Akinfenwa, in his book, said that is who he is and those of us who know him also know. He is just an apron string of Tinubu.”

The Afenifere leader noted that Akande was too junior to him, adding that the former APC national chairman was a political neophyte.

“I signed his (Akande) papers to be governor and the condition we gave for him to become governor was that of (supporting) sovereign national conference for the restructuring of the country back to federalism. That was the condition on which he was elected in 1999 and he reneged on that,” he added.

Adebanjo said South-West APC leaders, including Tinubu and Akande, sold the Yoruba race to Buhari to further their personal interests.

“They have sold out the Yoruba race to Muhammadu Buhari all because they want Tinubu to be president.

“That is not my business, but telling lies is the one I don’t know and I don’t know how a man like Akande who claims that we all come from the root of Obafemi Awolowo can be taking pride in his participation in the government of Buhari who they know is a disaster when all those who supported him initially are now regretting that they supported him.”

Further dismissing Akande’s authobiography, Adebanjo said, “There is no sensible man who will come out now and say he is proud of Buhari. It shows the type of character he (Akande) is.”

Falae had, through his Personal Assistant Moshood Raji, said he would respond to Akande’s claims.

Atiku’s media aide Paul Ibe had also faulted Akande’s accounts, noting that Atiku did not ask Tinubu for money during the campaign for the 2007 presidential election.

“As at that time, Asiwaju and Atiku found themselves in the same political party. So if there was funding to be made, it has to be made by stakeholders and members or that party. Tinubu was a member and founder of AC. Let us try and put this thing in proper perspective so that it doesn’t appear as if Atiku was asking him money for something else,” Atiku’s spokesman said.

The Atiku spokesman further alleged that Akande was acting according to Tinubu’s bidding.