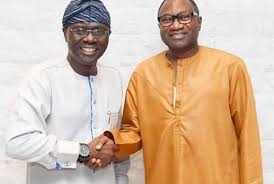 The National Chairman, Independent National Electoral Commission
(INEC), Prof. Mahmoud Yakubu has been counseled not to subvert the
electoral process to favour the ruling party.

Chief Olabode George, the Former Deputy National Chairman of Peoples
Democratic Party (PDP) gave the charge urging him to ensure that he
gives Nigerians free, fair and credible elections, saying that he must
ensure that nobody manipulate him to go against the people’s wish to
elect their true representatives in the coming elections.

Come Saturday 16th February Nigerians across the nation will file out
to determine with their votes, who takes up the baton via the
presidential and National Assembly poll, in which no fewer than 90
political parties are fielding candidates.

George made this counsel during a media parley held in his Ikoyi
office, while he also chides opponents, most especially the ruling All
Progressives Congress (APC) over recent comments credited to them
regarded as   inciting, uncultured and uncivilized which could provoke
violence.

Also, the Lagos State chapter of Action Democratic Congress (ADC),
immediately after the conference, announced it’s preference for
Atiku/Obi ticket, urging it’s members statewide to go and ensure
victory for the PDP presidential candidate, just as the called on the
INEC national chairman, Prof. Yakubu, to ensure that for the first
time Lagosians votes count.

Addressing newsmen, Chief George said his call on the INEC boss,
Yakubu was because he saw the coming poll exercise as a very special
one and an opportunity for the country to address the problems
confronting it, and, therefore, the need for him to make sure that the
exercise was free, fair and credible.

“I have to advise him, he must be fair in the manner the elections are
conducted. Let the elections be free, fair and credible. If he should
do that, he would be remembered that he contributed to the unity of
the country. Let nobody manipulate him to do otherwise,” he said,
reminding him that he would one day stand to account for whatever he
did here on earth before his creator.

The PDP chieftain, while decrying the statement credited to the Kaduna
State governor, Malam Nasir el-Rufai, that foreign election observers
would go back to their home countries in “body bags” if they were not careful, described such pronouncement as most uncivilized and provocative.

“The opponents, I have seen some uncivilized comments made by them.
The el-Rufai’s statement. He is like my younger brother. The statement
credited to him that foreign observers who come to monitor elections would go back in ‘body bags’ is chambolic, it is uncivilized and provocative,” he said, pointing out that Nigerians and the whole world deserved apology for such remark.

“Let them apologise to Nigerians and the whole world for making such
statement and others,” Chief George said.

The PDP chieftain, who is also the Atona of Oodua, while describing
democracy as best way to rule the people, however, counsel Nigerians
to examine the present position they now found themselves, compare it
with where they were four years back if they were better off before
casting their votes, declaring that situation of things in the country
had gone for a decline.

According to him, “The hospitals are not running anymore, do you earn
a living wage where you can provide for yourself and your family? Even
the rich are now crying, young boys are now hungry and angry.”

“They have now come back to renew their mandate, they should stop
nonsense. It’s time for real change,” he said.

He, therefore, enjoined all members and supporters of the party
nationwide to change plans immediately and move into PDP campaign
train in their various locations, even as he declared that the ACPN
manifesto also coincided with that of PDP.

Also addressing newsmen, Chairman, Lagos State chapter of ADC, Mr. Kayode Jacob, said the party was resolved to delivering its votes for the PDP presidential candidate, Alhaji Abubakar in this Saturday poll, but quickly clarified that all the Assembly candidates of the party still remained in the race and, therefore, not stepping down for
anybody.

Jacob, who said he was also speaking on the platform of CUPP, further affirmed that ADC was also positioned to ensure that “all processes put in place to rig election in Lagos State are aborted.”

He disclosed that towards this end, the party had written a letter to
the National Chairman of INEC, Prof. Yakubu, calling on him to ensure
that votes must count this time around in Lagos,  citing: “It is a
popularly known fact in Lagos that candidates of other parties other
than the ruling party hardly win and get returned in Alimosho, Ikeja,
Badagry and some other parts of Lagos West, Lagos Island and Eti Osa in Lagos Central with Ikorodu and Ibeju-Lekkki among others in Lagos East.”

Mudashiru Obasa, Speaker of the Lagos State House of Assembly, reacted to allegations of gross corruption against him by…

Burna Boy Reports have emeregd showing that Burna Boy was recently enmeshed in a messy faceoff with his neighbours.…

Lagos To Use 600 Patients For COVID-19 Drug Trial

COVID-19 Volunteers Yet To Be Paid Three Months Allowances

File photo According to a report by SaharaReporters, COVID-19 volunteers for the Nigerian Government helping to tackle Coronavirus are…

While With Psquare, I Had To Share A Room With Their Driver Even Though A Duplex Was Empty – May D Opens Up

May D with PSquare Nigeran singer, May D has come out to shared his own experience with the defunct…

Despite having the second highest COVID-19 cases in the country, social distancing was not fully enforced during the Eid…