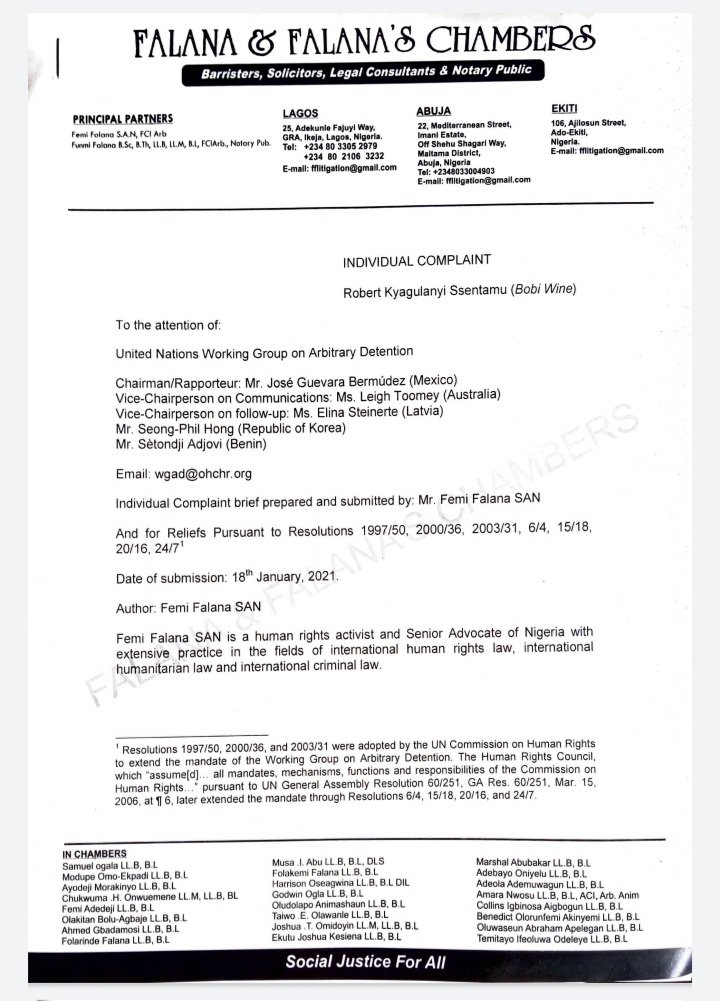 Falana, a Senior Advocate of Nigeria (SAN), disclosed this and made a copy of the complaint available to journalists, on Tuesday.

Falana said Bobi Wine was denied access to his lawyers in a bid to prevent him from filing a petition against the declaration of 76-year-old President Yoweri Museveni as winner of the highly-flawed presidential election.

He said: “We have submitted a complaint against the government of Uganda to the United Nations Working Group on Arbitrary Detention concerning the detention of the detained couple.”

The complaint read partly, “Mr. Wine and his wife are being illegally detained for days without any criminal charges preferred against him. He has also been denied adequate supply of food by hundreds of Uganda military forces and policemen who have laid siege to his house for the umpteenth time since the election day.

‌“I am therefore seeking an opinion from the Working Group finding the house arrest and continuing detention of Mr. Wine and his wife to be arbitrary and in violation of Uganda’s Constitution of 1995 (as amended) and obligations under international human rights law including the International Covenant on Civil and Political Rights and the African Charter on Human and Peoples’ Rights to which Uganda is a state party.”

Wine, his wife, Barbara Kyagulanyi, children and domestic staff, were said to have been detained in the house after he cast his vote on Thursday.

The pop-star-turned-politician, 38, has repeatedly experienced harrassmsent, arrest and detention by Ugandan security agencies in the period leading to the just-concluded election in which he polled 34.8 per cent of the votes.