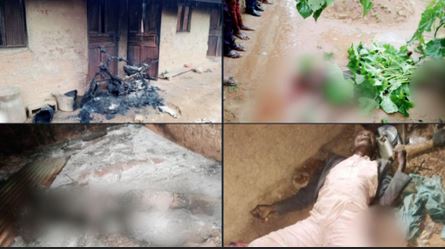 More details have emerged on how an armed Fulani militia group bypassed several military checkpoints to kill 33 persons in four communities in the Zango Kataf area of Southern Kaduna on Wednesday night.

SaharaReporters gathered that the attackers stormed the communities at about 11:00pm with trucks and made their way through the military checkpoints despite the curfew in place to unleash terror on the residents, who were already sleeping.

During the attack, six people were killed in Apiashyim Village while 20 houses were burnt.

Another seven villagers were murdered in Kibori Village.

The bandits were said to have moved to Atakmawei around 12:00am where 12 persons were killed and 10 houses burnt.

In a statement on Thursday, spokesperson for Southern Kaduna Peoples Union, Luka Binniyat, said that the attackers operated between 11:00pm and 4:00am unchallenged.

The statement reads, “In Apiako, scared villagers who hid under grown maize crops said they saw what looked like an armoured military truck pulled up at the village square followed by familiar military motorbikes while the attackers were busy killing but never made any attempt to stop them.

“For the records, we want to say that Governor Nasir el-Rufai of Kaduna State has tied up our law-abiding people under an irrational, protracted curfew which is obviously intended to cause maximum harm to our communities.

“According to survivors, the Fulani militia include Fulani youth born and raised in the affected villages.

“They would come to a compound and shout out the name of the occupants challenging them to come out and face them.”

The statement added that many residents were still trapped in their homes and no one could risk the brutality of the military enforcing the curfew.

The group called on the international community to come to their aid against sponsored genocide on Southern Kaduna communities.