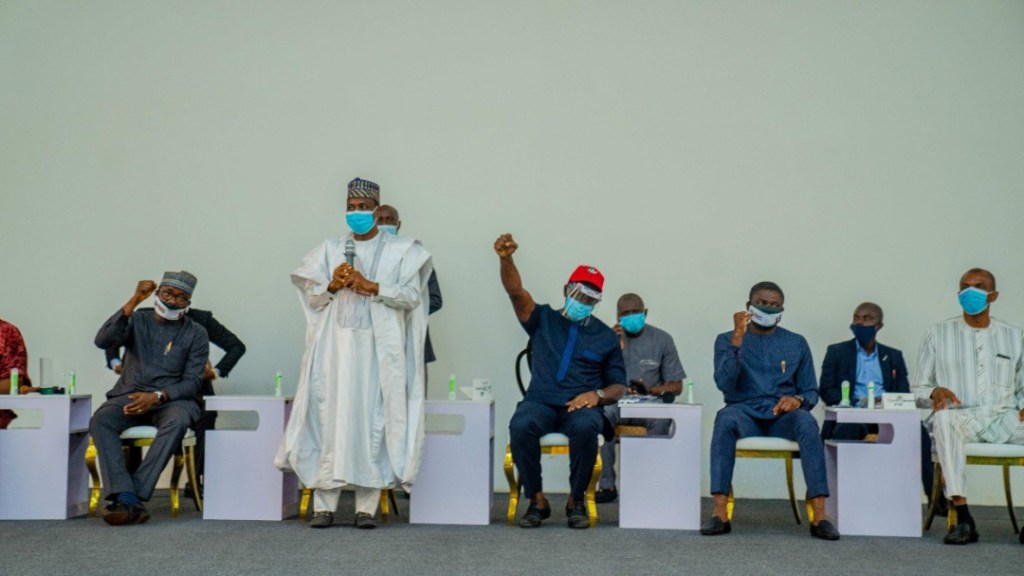 Ahead of the September 19, 2020 gubernatorial election in Edo State, Alh. Aminu Tambuwal, Governor of Sokoto State and Chairman of Peoples Democratic Party (PDP) Governors’ Forum, his Edo State counterpart and PDP candidate in the poll, Godwin Obaseki have called on political actors in to shun violence and embrace peace.

They urged leaders of various political parties contesting the governorship election in the state to appeal to their supporters to be law-abiding, peaceful and ensure violence-free electioneering.

Tambuwal in a chat with journalists after the party’s stakeholders’ meeting held in Benin City, on Thursday, said: “I am appealing to both sides and also to leaders of the various political parties participating in the governorship election to continue to encourage their supporters to restrain from unleashing mayhem and violence on the electorate.

“This appeal has become necessary following a small crowd of a political party that came to the Benin Monarch’s palace to boo leaders and supporters of the PDP during the flag-off of our campaign. That is a sign that the political party is planning violence.

“I appeal to leaders of the various political parties with the interest of Edo State at heart, to speak with their followers and make sure the election is free and fair.”

He warned against plans to use security agencies to rig the election, saying: “We have seen cases where federal might was used in isolated elections in Nigeria through the deployment of security personnel to such a state to intimidate voters, instead of taking them to North-East where the country is facing serious security challenges. This must not be done in Edo State.”

Speaking further, he called on PDP members in the state to put aside their differences and come together to win the poll.

He added: “The party has a transformed political process that revolves around the people. No single individual owns the PDP.

“Don’t allow intimidation of any kind but rather come out en masse to vote; ensure you protect your votes and by God’s grace PDP will win the election.”

In the same vein, Obaseki said his administration is not weak in responding to political violence but as governor, he will use state powers with discretion and moderation.

“I am not weak as a Governor but I believe in respecting human rights,” he said.

Quizzed on the attacks on PDP supporters in front of the Oba of Benin, the Governor said his administration is doing all within the ambits of the law to ensure that perpetrators of the dastardly act are apprehended and made to face the full wrath of the law.

He added: “I believe my powers should be used responsibly, particularly in the face of provocation, and especially what the other party did in the palace by attacking our supporters in an attempt to provoke me.”