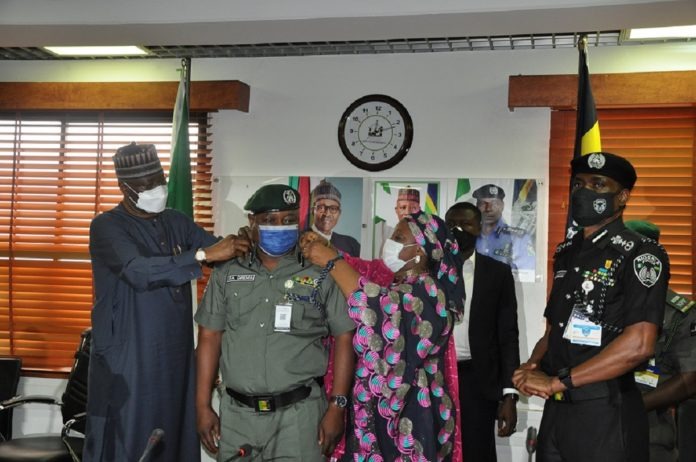 The ceremony was attended by the Secretary to the Government of the Federation, Boss Mustapha. The SGF congratulated the newly promoted officers and ch​arged them to see the promotion as a call for improved services to the nation. He assured of the Federal Government’s commitment to the ongoing reforms of the Nigeria Police Force by the Inspector General of Police.

On his part, the IGP noted that since his assumption of office in January, 2019, a total of forty-one thousand, eight hundred and sixty-three (41,863) officers and men of the Force across different ranks have been promoted to their next ranks. He stated that the promotion exercises – a strategic management approach directed at motivating the workforce in addressing current and emerging internal security threats – have been guided by the principles of seniority and merit and reflective of records of discipline and invaluable experience.

IGP Adamu, while congratulating the officers for their well-deserved elevation, charged them to deploy their intellect and demonstrate sound professional judgement in all their decisions at all times.

The Officers decorated include: DIG Adeleye Olusola Oyebade, mni who until his promotion to the enviable rank of Deputy Inspector General of Police, was a directing staff at the National Institute of Policy and Strategic Studies (NIPPS). He has been deployed as the DIG in charge of the Department of Research and Planning. Also, in line with geo-political balancing considerations, he doubles as the DIG in-charge of the South-West geo-political zone of the country, a void created by the recent retirement of DIG Peter Babatunde Ogunyanwo, fdc. Others decorated are: AIG Amba A.A Asuquo psc, AIG Nkereuwem A. Akpan, AIG Olafimihan Adeniran Adeoye, AIG Aishatu Abubakar, PhD, CP Jonathan Towuru, CP Sikiru Kayode Akande, DCP Johnson Oluwole Adenola and DCP Grema Jibir Isa.