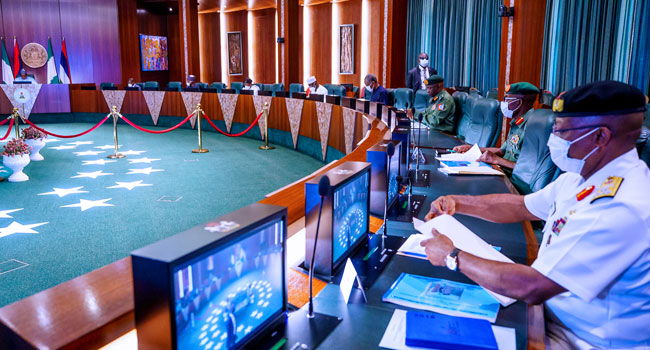 President Muhammadu Buhari has told the Service Chiefs that their “best is not good enough” in view of the security challenges being experienced across the country.

“Mr. President has expressed great concern over the declining security situation in the country,” Monguno said.

“He is extremely unhappy about what is happening and he feels that even though the security agencies are doing their best, their best is not good enough for him and he wants an immediate reversal of the current trend.

“An immediate reversal of our misfortunes in all their dimensions. Mr President also told us clearly that he and indeed the administration came to power on the platform of three issues, fighting insecurity, overcoming our economic difficulties and dealing with the scourge of corruption.”

Monguno said the President told the service chiefs that his administration came to power on the promise to tackle the security challenge, revive the economy, and deal with the scourge of corruption.

He said the pursuit of economic growth and the war on corruption would be an “exercise in futility” without security.

The NSA said the President had told the security chiefs that he would not accept any further escalation of the current situation as no one among them was forced on him.

Monguno said the President said it was left for the service chiefs to live up to expectations.

“We must also find a way out to address the use of hard drugs and the proliferation of small arms and light weapons,” he also said.

The NSA, who said he submitted that the current effort to tackle security challenge would not take the country to promised land unless the government put an end to the use of unregistered SIM cards.

He said the President had directed him to work with the Minister of Communications and Digital Economy, Dr Isa Pantami, to tackle the issue.

Munguno, who said the President was also disturbed by lack of synergy among the security agencies, called the Governors of North West and Niger State for a meeting on the current security challenge.