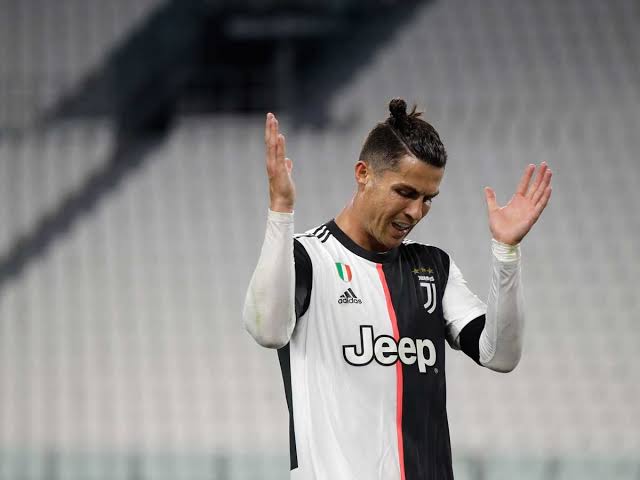 Italian Cup: What happened after Ronaldo missed a penalty kick

Cristiano Ronaldo missed a penalty as Juventus progressed to the Coppa Italia final on away goals after a 0-0 draw against AC Milan in the semi-final second leg.

Despite the four-month gap between the two legs, there were similarities between the matches. Ronaldo also took a penalty at the San Siro – but scored – after a VAR review and Milan had Theo Hernandez sent off in the 1-1 draw in February.

The similarities began in the 13th minute when Andrea Conti was penalised for the slightest of handballs, which needed a two-minute VAR consultation to award Juventus the penalty. But, unlike the first leg, Ronaldo hit the bottom of the post.

Six seconds later, Ante Rebic – who scored Milan’s goal in the first leg – was sent off for a dangerously reckless challenge on Danilo, with the visitors once again reduced to ten men in the Coppa Italia semi-finals.

Milan were unable to find the goal they needed as Ronaldo’s first-leg penalty ultimately sent Juventus into the June 17 final, where they will face either Napoli or Inter Milan.

The intensity of the tie matched that of the first leg and Juventus started strongly. The hosts could have gone ahead inside minutes as Alex Sandro burst down the left flank, skipping over anyone in his path. He then pulled the ball back for Douglas Costa in the middle, but he just dragged his effort wide of the post.

The game exploded into controversy in the 13th minute when Conti appeared to move his arm slightly towards the ball as it bounced off him before Ronaldo controlled an incoming corner. VAR intervened with the referee also consulting the pitchside monitor and, after a two-minute break, he awarded Juventus the penalty, with Milan incensed.

It could have been history repeating itself after Ronaldo scored from the spot late in the first leg, but Milan were vindicated as the forward could only find the bottom of the post, with Gianluigi Donnarumma also leaping the right way.

But in another hark back to the first leg, Milan had a player sent off six seconds after Ronaldo’s miss. It was an incredibly dangerous and reckless tackle from Rebic as he caught Danilo high in the chest with his studs up, although the referee initially only had a yellow card in his hands. However, the card was quickly changed to red and Rebic given his marching orders.

Juventus continued to pile on the pressure throughout the first half and went close again just after the half an hour mark. Danilo breezed past Hakan Calhanoglu on the right before cutting the ball back for Blaise Matuidi, but his half volley went straight at Donnarumma, who pushed the effort away.

Cristiano Ronaldo started for Juventus along with Paolo Dybala in attack. But there was no place in the matchday squad for Aaron Ramsey.

Milan were without talismanic striker Zlatan Ibrahimovic through injury while Samu Castillejo and Theo Hernandez were also suspended.

Milan had a few sights of goal, but their best of the first half was in the 42nd minute. Calhanoglu lofted a wonderful free-kick into the area, but it just floated over the head of Alessio Romagnoli. There was a Milan penalty shout as Simon Kjaer went down under pressure from Leonardo Bonucci, but nothing was given.

The visitors could have sprung an early second-half surprise when they had their best chance of the game. Giacomo Bonaventura drove down the right-hand side, leaving the Juventus defence in his wake, before floating the ball into the middle for Calhanoglu. However, he could only divert his diving header agonisingly wide of the post.

The second half had less drama than the first, but Milan went close again in the 79th minute as Kjaer nodded the ball just wide of the post from a corner. Not long after, Donnarumma made another great save as he pushed away a curling Paolo Dybala shot from the top corner.

In the final seconds of game, the Milan goalkeeper impressed again as Sandro hammered an effort in his direction, but he pushed it away strongly to keep a clean sheet. However, a lack of finishing touch at the other end cost Milan a place in the final as Juventus reached a record 19th Coppa Italia final.

While Milan were unable to reach the final, they did manage to stifle Juventus and keep a clean sheet at the same time. In any other circumstances, a goalless draw at the Juventus Stadium would have been a positive result.

While much of the credit must go to Donnarumma, Milan captain Romagnoli led from the front – at the back. He kept the talent of Ronaldo under wraps and seemed to be involved in every defensive move the visitors made.

At one stage, he put a Dybala cross behind for a corner before busting a gut to make a pin-perfect tackle on a free running Ronaldo – no easy feat.

Juventus’ next game will be on June 17 when they will face either Napoli or Inter in the Coppa Italia final. They will then play Bologna away on Monday 22 June when Serie A resumes (kick-off 8.45pm).