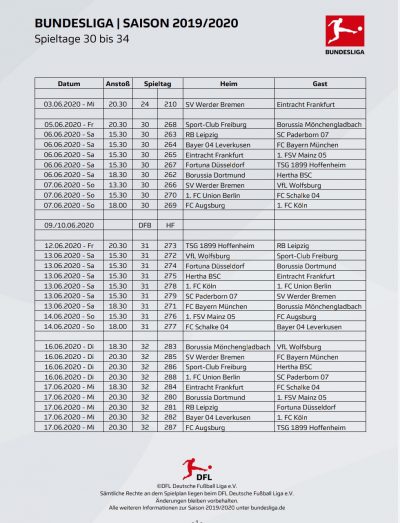 The DFL – Deutsche Fußball Liga, on Wednesday announced the exact schedule for the Bundesliga and Bundesliga 2 matches until the end of the current 2019-20 season.

In the Bundesliga, there are still a few matches to come this season where teams in the upper third of the table will face each other. For example, on Saturday, 6 June, Bayer 04 Leverkusen will encounter FC Bayern Munich. A week later, on Saturday, 13 June, Borussia Mönchengladbach will be playing away at FC Bayern Munich. On Matchday 33, RB Leipzig will play Borussia Dortmund.

The match between SV Werder Bremen and Eintracht Frankfurt from Matchday 24 has been rescheduled. This was cancelled as a result of the UEFA Europa League match of Eintracht Frankfurt in Salzburg being postponed and will now take place on Wednesday, 3 June.

Also Read: Bundesliga and SkyPerfecTV! Extend Partnership For Another 5 Years

Starting on Matchday 30, there will still be some duels in the Bundesliga 2 in the fight for promotion to the Bundesliga, among other things. On Matchday 33, for example, 1. FC Heidenheim 1846 will host Hamburger SV; a week later, the current table leader, DSC Arminia Bielefeld, will come up against Heidenheim. Before that, on Matchday 31, there will be the derbies between 1. FC Nürnberg and SpVgg Greuther Fürth (Saturday, 13 June) as well as between Karlsruher SC and VfB Stuttgart (Sunday, 14 June).

In the Bundesliga 2, the match on Matchday 28 between Bielefeld and SG Dynamo Dresden has been postponed. This is to allow SG Dynamo preparation time of at least one week before the first regular season game after the coronavirus-related interruption of fixtures – following the quarantine measures that were imposed by the Dresden health authorities on the entire professional squad. The match against Bielefeld will now take place on Monday, 15 June.

Meanwhile, the encounters of Matchday 26 between Hannover 96 and Dresden (Wednesday, 3 June) and Matchday 27 between Dresden and Fürth (Tuesday, 9 June), which had already been postponed due to the imposed quarantine, have been rescheduled. 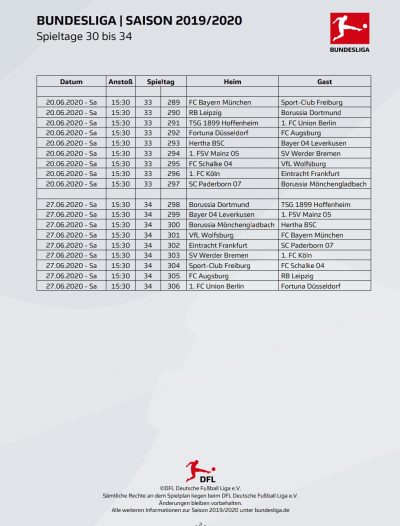