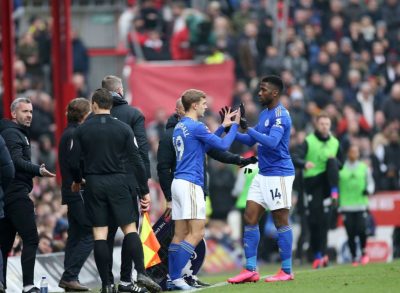 Kelechi Iheanacho netted the winner as Leicester City booked a place in the Fifth Round of the Emirates FA Cup following a 1-0 win against Brentford at the Griffin Park on Saturday afternoon, reports Completesports.com.

Iheanacho scored the decisive goal in the fourth minute, thanks to an assist from James Austin.

The Nigerian forward’s left-footed shot from inside the box beat goalkeeper Luke Daniels after he was teed up by the defender.

He was replaced by Kiernan Dewsbury-Hall in the 68th minute.

Also Read – Rohr: I Want to Continue As Nigeria Coach; Can Agree New Contract With NFF

The goal also increased the 23-year-old’s tally to seven and three assists in 12 appearances in all competitions for the Foxes this season.

Leicester City will next face Aston Villa in a Carabao Cup semi-final second leg tie at the Villa Park on Tuesday.