On the day the Christian Association of Nigeria (CAN) led its members across the country to protest against incessant killings and insecurity in the country, a 30-year-old man was yesterday caught with what is suspected to be an Improvised Explosive Device (IED) at the Sabon Tasha branch of the Living Faith Church, aka Winners Chapel in Kaduna.

It was learned that it was not the first time the suspect was coming to the church, having been sent away just last week. The Chief Security Officer (CSO) of the parish stated that the suspect was monitored on a CCTV camera carrying the bag into the church auditorium.

According to the CSO, simply identified as Edet, the yet-to-be-identified bomber suspect successfully gained access and was already seated before his bag was searched and the explosive device was found.

Edet, who said he was not in a position to hand out details to the press, appealed to newsmen to wait to get details from the presiding pastor when the service was over. He, however, said the suspect had been handed over to the police and moved to the Sabon Tasha Division of the Nigeria Police Force.

The suspect was arrested in the church’s toilet after the CCTV cameras exposed him. He was trying to detonate the device when he was arrested, it was gathered. Another information had it that one of the worshippers was said to have informed security agents at the church who arrested the suspects.

In an interview the suspect says the items found in his bag were firecrackers and not bomb.

Are these Bombers are Firecrackers? 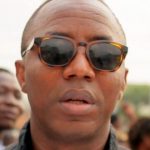